Japan to create wall of ice around Fukushima water leaks

by Mihai Andrei
in Environmental Issues, Physics
Reading Time: 2 mins read
A A
Share on FacebookShare on TwitterSubmit to Reddit

Somebody in Tokyo is reading Game of Thrones: the Japanese government has announced plans to create a wall of ice underneath the contaminated area to contain the water leaks from the Fukushima nuclear plant. Prime Minister Shinzo Abe said his administration will provide the money for this. 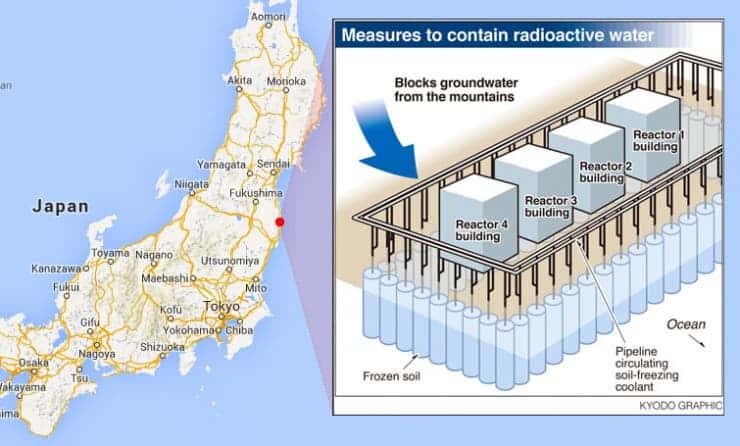 “The government needs to resolve the problem by standing at the forefront,” he told a meeting of his nuclear disaster response team. “Discarding the current, impromptu response, we will set up our basic policies for a fundamental resolution of the contaminated water problem. “The government will do its best and take the necessary fiscal action,” he said, referring to tapping taxpayer funds.

Some thousands of tonnes of radioactive water are being stored currently in temporary tanks at the site, 220 kilometres (135 miles) north of the Japanese capital.

Power reactors work by splitting atoms, typically uranium, in a chain reaction. The reactor continues to generate heat after the chain reaction is stopped because of the radioactive decay of unstable isotopes, fission products, created by this process. This decay of unstable isotopes, and the decay heat that results, cannot be stopped. In the aftermath of the 03.11.2011 earthquake, 18.000 lives were claimed, though none of them officially due to radiation leaks.

Still, the oceans, and consequently, humans, are still under heavy stress from the leakage. So far, despite valliant efforts and several proposed solutions, the problem is still very acute. Hopefully, this will put an end to it, and the Fukushima situation will cool down.