by Tibi Puiu
in Physics, Technology

In the wake of the Fukushima nuclear power plant disaster, and as always Chernobyl, as anti-nuclear manifestos are quick to remind every time nuclear powered energy is concerned, there seems to be a sort of stigma applied to nuclear power. Countries are revising their policies –  some for the better, being long overdue, while other simply limit nuclear power rather precariously. Besides the actual chain reaction, meltdown or other nuclear hazard event which might possibly occur, there’s an other big issue with nuclear power and that’s  its byproduct – nuclear waste. A novel technique involving a particle accelerator which can create fast neutrons, in the process lowering the half-life of waste from hundreds of thousands of years to mere hundreds, might re-balance the odds back to nuclear, however. Nuclear energy might be in for a come back.

The idea that you can you stick dangerous radioactive material, that stays radioactive for even millions of years, in a lead can and hope that it will never leak in the environment is preposterous. Still, this is the only or primary way nuclear waste from facilities around the world is handled, and of course this has attracted a wave of unpopularity.

Scientists at the Belgium nuclear research center SCK CEN in Mol have developed a technology which uses a particle accelerator as a neutron source, in an attempt to make nuclear waste much less unfriendly to the environment. The idea, in small simple lines, goes like this:  you alter the geometry of the reactor chamber such that neutrons produced by the nuclear reaction don’t multiply in other subsequent reaction by having them escape the reactor vessel. In the meantime, to  sustain the nuclear fission process you pump neutrons from a spallation source, which is a material that can produce lots of fast-moving neutrons when you hit it with high energy proton. If cut out the accelerator,t he fission reaction cannot sustain itself , so there isn’t any peril of a meltdown or chain reaction disaster. 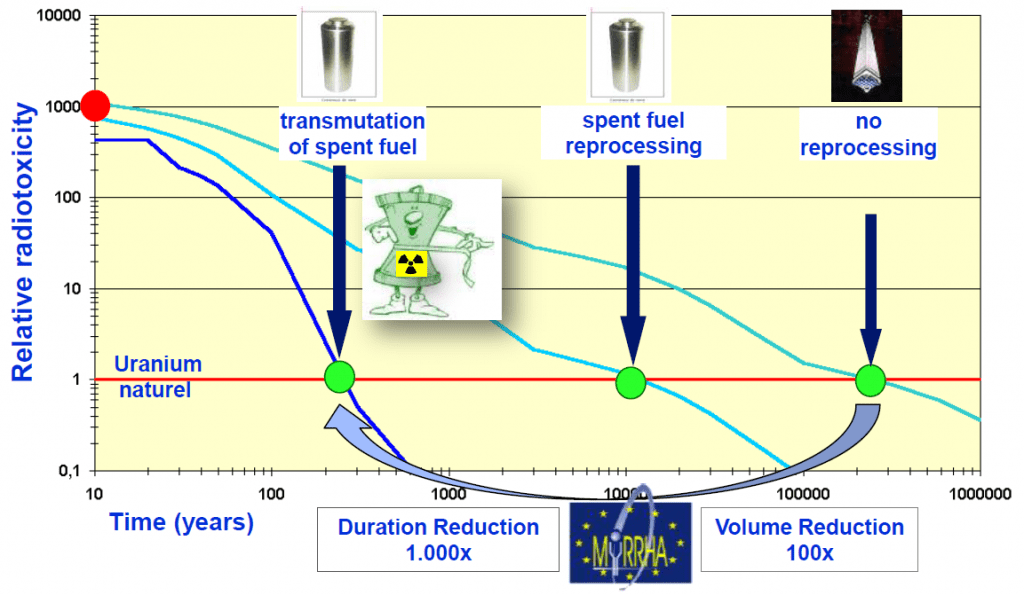 Also, the waste nuclear fuel is transmuted into fission products with much shorter half-lives by a few orders of magnitude, which makes burring waste for a few hundred years actually feasible and safe.  A prototype of the system should be up and running by the early 2020s. Hopefully, this might put nuclear energy back on track as the leading clean, safe and efficient form of energy.

For more details on this very important subject, I’d like to invite you to read the Mol scientists’ paper from CERN.