Immediately after the incident at the Fukushima Daiichi nuclear power plant, as a result of the devastating tsunami which swept the country resulting thousands of casualties and damage amount to $40 billion, Japanese authorities quickly evacuated the local human population such that exposure to radiation could be kept at a minimum. The local wildlife, however, wasn’t treated with the same privilege. A month after the tsunami, scientists collected butterfly specimens in the vicinity of the nuclear power plant and found that the insects presented a number of peculiar mutations. Six months later the same check was made for the same species, and findings suggest that the mutations actually multiplied, as an evident effect of radiation exposure. 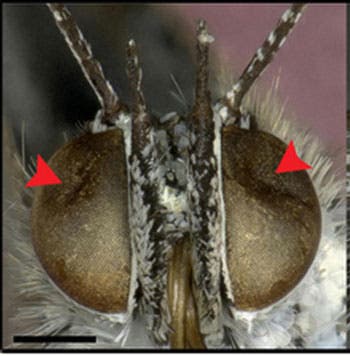 Some 144 pale grass blue butterfly were collected, of which 12% of them showed a number of strange mutations, like dented eyes and deformed wings.  When they mated, the offspring showed a mutation rate of 18%, and when one ‘infected’ butterfly was mated with a healthy one, that rate jumped to 34%.This suggested that the butterflies’ germ line, or the cells that turn from egg to sperm, had suffered irremediable damage, which get transmitted to the offspring. Scientists say these mutations will get passed down for many generations.

“Our results are consistent with the previous field studies that showed that butterfly populations are highly sensitive to artificial radionuclide contamination in Chernobyl and Fukushima. Together, the present study indicates that the pale grass blue butterfly is probably one of the best indicator species for radionuclide contamination in Japan,” researchers wrote in the report published in the journal Nature.

The species is notoriously sensitive to environmental contaminants, which is why scientists decided to study them to begin with, so the fact that the pale grass butterfly has suffered mutations isn’t a indicator that other local fauna may have been subjected to the same genetic anomalies, though possible. I’d like to see, personally, a similar research catering to other species, insects or mammals.

The levels of radiation absorbed by the butterflies are not enough to harm humans, however. In fact, Japanese researchers have found very low amounts of radioactivity in the bodies of about 10,000 people who lived near the Fukushima Daiichi power plant when it melted down. The threat appeared to be considerably lower than in the aftermath of the Chernobyl accident, the experts agreed.

“Out of 10,000 people with a dose of 1 millisievert, the radiation would cause two to get cancer during their lifetimes, but about 3,500 would get cancer also without any radiation,” said Roy Shore, chief of research at the Radiation Effects Research Foundation in Hiroshima, Japan. “The jury is still out, but I expect the public health impact from radiation to turn out to be considerably lower than that of Chernobyl.”