by Mihai Andrei
in Other, Physics
ADVERTISEMENT 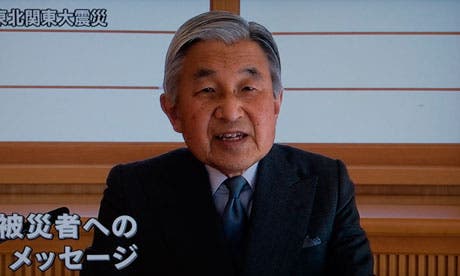 The situation in Japan is far from calming down; the 9.0 earthquake and the tsunamis it triggered unleashed a chain of events which keep pointing towards a future that can only be dire. In his first official statement since the event, emperor Akihito says events at Fukushima are unpredictable, and he stated that he is “deeply concerned” about the nuclear situation.

In a rare public address, he urges his people to work together to overcome the worst crisis since WWII, saying that the events at the Fukushima power plant were “unpredictable”.

“I am deeply hurt by the grievous situation in the affected areas,” Akihito said in his first public appearance since Japan’s north-east coast was devastated by a powerful earthquake and tsunami in which more than 10,000 people may have died. “I hope from the bottom of my heart that the people will, hand in hand, treat each other with compassion and overcome these difficult times.”

As a symbolic figure, Akihito must stay away from political issues, but his appearance may go some way to lift the people’s spirits and give them the extra boost needed to secure the concerns. Akihito is regarded as a very intelligent and thoughtful man, and his opinions are respected and cherished by the Japanese, even 65 years after his father, Hirohito, was forced to renounce his divine status following Japan’s defeat in WWII.

“I am deeply concerned about the nuclear situation because it is unpredictable,” he said in remarks broadcast on television. “With the help of those involved I hope things will not get worse.”