by Mihai Andrei
in Home science, Studies
Reading Time: 3 mins read
A A

You probably remember the massive 9.1 earthquake that struck Japan last year and the subsequent problems that followed – most notably the huge tsunamis that struck the Fukushima nuclear plant, bringing it close to a meltdown. Now, according to the first scientific assessment made on the spot, the tsunami was indeed as formidable as the first estimates claim. 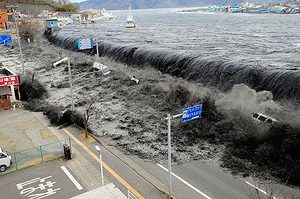 They conducted surveys along 2,000 kilometres of coast, thus creating the biggest tsunami data set the world has ever seen so far, but until now, no verified data was obtained from the impact perimeter: the 20-kilometre-radius restricted zone around the crippled plant, where scientific work had been forbidden.

However, a team of seven set out on a laudable two day mission to determine the height and inland penetration of the tsunami that struck the coast of Japan about an hour after the massive temblor struck. The team also included two local guides and two local authorities, and was led by Shinji Sato, a civil engineer at the University of Tokyo. By analyzing the ‘tsunami marks’, like the water damage, the debris, and trees, they confirmed that the waves were at least 14-15 meters high, just as big as the first estimates claimed, and the biggest height they estimated was 21 meters. Still, the team was not allowed to get closer than 2 km to the nuclear plant.

Finding relevant clues about tsunamis after almost a year was definitely a challenge, and the team stumbled upon some really interesting things there. For example, some buildings seemed to have not taken any damage whatsoever; aside for a dent in its chimney, the gymnasium of Ukedo Elementary School in Namie, located less than 5 km away from the plant, looked intact. The banners inside were untouched, and a small Japanese flag was intact. At a restaurant from town, researchers found a pristine newspaper dated 11 March 2011 – the date of the earthquake. But without a doubt the biggest surprise was when they met a herd of cows; the animals somehow survived the tsunami and adapted to the newly created environment, leading quite the life now.

“I often scratched my head at the juxtaposition of utter devastation and relative intactness,” says Yeh.

Scientists will now analyze the data to refine computer simulations and better understand how the sea contour influenced the tsunami; many believe the tsunamis which struck the Fukishima power plant were actually a combination of two different waves, one coming from the North and one coming from the South. It is very important to gather valuable information from this tragedy, in order to understand how we can protect ourselves from other such disasters.

“Nobody else has obtained this kind of information,” says Philip Liu, a tsunami researcher at Cornell University in Ithaca, New York, who was not involved in the survey. “It’s valuable evidence of how the tsunami has behaved.”

Via Nature. Photo via National Geographic.