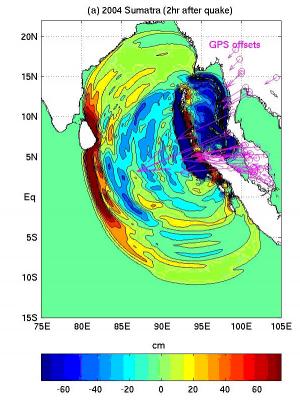 In case you don’t know, a tsunami is a series of waves created when a body of water, such as an ocean, is rapidly displaced. Earthquakes, mass movements above or below water, volcanic eruptions and other underwater explosions, landslides, underwater earthquakes, large meteoroid or asteroid impacts and testing with nuclear weapons at sea all have the potential to generate a tsunami. A tsunami can be unobservable, but it can just as well be devastating. Recent disasters showed how unprepared we were for them, so scientists have been trying to do something to improve the warning systems.

Studies conducted by NASA on tsunamis revealed an innovative method which could achieve that goal, and a potentially groundbreaking theory on the source of the 2004 tsunami in the Indian Ocean. In one study, published last fall in Geophysical Research Letters, researcher Y. Tony Song of NASA’s Jet Propulsion Laboratory, Pasadena, Calif., demonstrated that real-time data from NASA’s network of global positioning system (GPS) stations can detect ground motions preceding tsunamis and reliably estimate a tsunami’s destructive potential within minutes, well before it reaches coastal areas. Conventional methods rely on estimates of an earthquake’s magnitude to determine whether a large tsunami will be generated but earthquake magnitude is not always a good thing to rely on.

This method estimates the energy that an undersea earthquake transfers to the ocean and generates data from coastal GPS stations near the epicenter. With the data, ocean floor displacements caused by the earthquake can be inferred.

“Tsunamis can travel as fast as jet planes, so rapid assessment following quakes is vital to mitigate their hazard,” said Ichiro Fukumori, a JPL oceanographer not involved in the study. “Song and his colleagues have demonstrated that GPS technology can help improve both the speed and accuracy of such analyses.”

“If this is found to be true for other tsunamis, we may have to revise some early views on how tsunamis are formed and where mega tsunamis are likely to happen in the future,” he said.

Hopefully this method is going to do better and disasters like the one in 2004 will be avoided [edit: it didn’t work out so fine, in 2012, a massive earthquake hit Japan, generating a massive tsunami that caused significant damage].