by Mihai Andrei
in Geology, Videos
Reading Time: 2 mins read
A A
Share on FacebookShare on TwitterSubmit to Reddit

The 9.0 (it seems this is the actual magnitude) earthquake that hit Japan on the 11th of March created an absolutely incredible number of aftershocks, some of which were pretty intense on their own. However, a few days before it, as stress built up the subduction area between the Pacific and North American plates, one could easily see some foreshocks too.

The 7.2 temblor, which was one of these foreshocks, struck Japan on March 9, and it was pretty strong on its own; however, since the big earthquake started, aftershocks continue to rattle Japan, and for the past days, pretty much every significant earthquake in the world took place in that area. 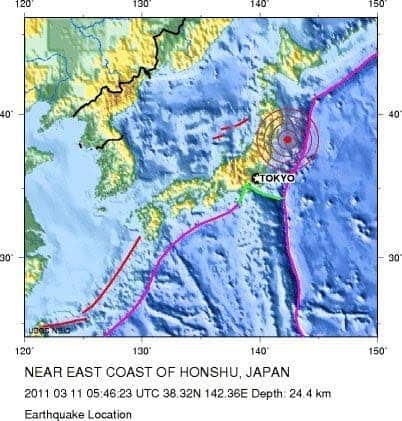 Just a few hours after it, there were 19 reported aftershocks, and the estimated number now is over 100. This was the 4th biggest earthquake ever to be recorded, and despite the fact that aftershocks seem to decrease in intensity, there is no indication of them stopping any time soon. Before this, since 1973, there were only 9 earthquakes bigger than 7.0 recorded in Japan – now that number has increased greatly.