Today, more than 100 years ago: the great earthquake of San Francisco

The great San Francisco earthquake took place on April 18, 1906, rupturing along the San Andreas fault for a total of 477 kilometers. The earthquake was so strong that it can be felt from Los Angeles to Nevada and Oregon, even though it had an esimated magnitude of 7.9, which makes it 10 times less powerful than the recent earthquake that took place in Japan.

It struck at local time 5:12 a.m when the San Andreas fault gave away, and since there wasn’t any accurate way of determining an earthquake magnitude back then, the estimated magnitude is somewhere between 7.8 to 8.3, with the most accepted value being that which I told you above.

The effects were devastating. The ground kept shaking for more than a minute, and the town of Santa Rosa, 50 miles north from San Francisco was leveled to the ground. San Francisco, the most popular and important city in California, but it couldn’t escape it. Stanford University collapsed. Out of 400.000 people, 300.000 were left homeless. Even without the fires that followed the damage would have been enormous; but the fires did follow. The conflagration lasted more than four days, with firemen from all the west coast desperately fighting to contain it, and when the fire finally stopped, the city was in ruins. The heart of the West Coast lay in rubble. 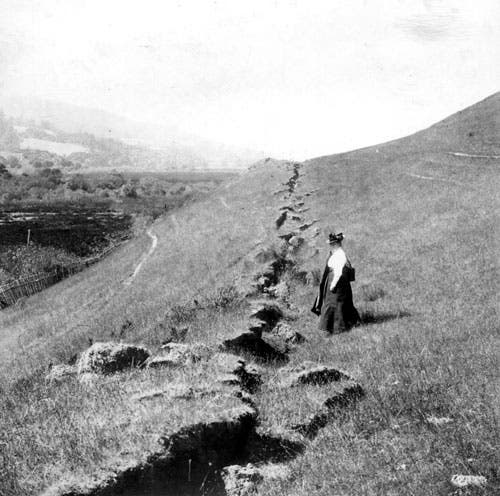 The good thing about it (if you can say that) is that it raised an enormous amount of awareness on the issue of seismic hazards, and constructors started to take into consideration more and more seismic studies and risks, as well as other subsequent worse case scenarios; and San Francisco lived, and was rebuilt fast. As a matter of fact, it was built too fast… which brings us to today’s problems. The faults around California are way overdue for another major earthquake, and looking at the recent events in Japan, one can only wonder just how prepared the US is to manage such a tragic, but likely event.