As Japan struggles to control the situation at the Fukushima power plant, an even more complicated question arises; where will Japan get its energy ? If they completely give up on nuclear power, which is not the most inspired of ideas if you ask me, they will face some very limited options. 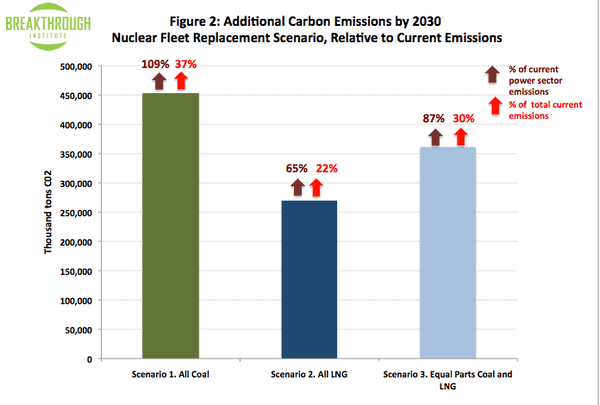 As it turns out, replacing nuclear power with coal and LNG would add somewhere between 25 and 37 percent of the country’s current carbon emissions. According to the Breakthrough Institute, renewables can’t do all the work either:

With an assumed capacity factor for the country of 15 percent, this would require an installed solar capacity of 432 GW, more than four times the country’s planned goal of 53GW of solar PV capacity by 2030. Installation of this solar PV capacity would cost an estimated $2.16 trillion dollars, and cover roughly 2.7 million acres, equivalent to 110 percent of Japan’s land area.

Wind wouldn’t cut it either:

The installation of this 324 GW of wind turbines would cost around $798 billion, and would require 81,1141 acres. Again, this number represents the area taken out of production on a wind farm, but the wind farm itself would need to be as large as 2.8 billion acres, representing a full 111% of Japan’s land total area.

So without any other serious viable options, Japan can only significantly raise their carbon emissions and take a step backwards in energy evolution, or continue using nuclear power, and take a risk, but a really small one, and keep going at full gear. Considering the fact that this kind of catastrophic event takes place every thousand years or so, that’s a no brainer if you ask me.