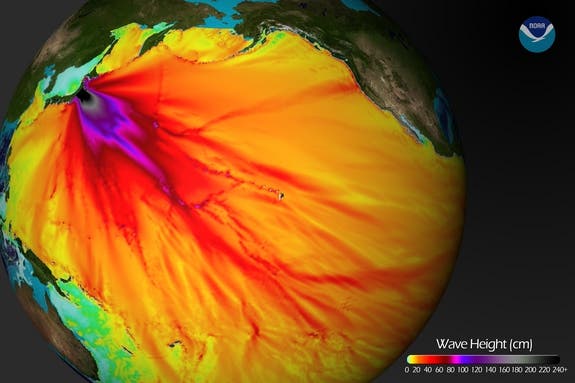 This picture, created by a computer model at NOAA displays the expected heights of the tsunamis created by the 8.9 earthquake in Japan (which may be “upgraded” to 9.0 – calculating magnitudes is a pretty delicate issue).

Of course the largest wave heights are expected near the epicenter, off the coast of Sendai, Honshu, Japan. Generally speaking, the heights will decline with distance, but the near-shore heights will also decrease; for example coastal Hawaii will not expect heights of that encountered in coastal Japan.

The earthquake is one of the most powerful ever to be recorded, and it took most geophysicists and geologists by surprise, as almost nobody was expecting an event of this magnitude. Tsunamis caused even more damage, and things can get significantly worse for Japan (and not only) if the meltdown of several affected nuclear plants isn’t prevented. It seems however that the Japanese are handling the situation very well, and everybody is doing everything they can to limit the damage, and most of all, casualties.