by Mihai Andrei
in Geology, Physics
Reading Time: 2 mins read
A A
Share on FacebookShare on TwitterSubmit to Reddit 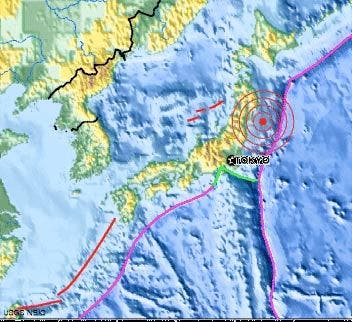 The damage caused by the 8.9 earthquake in Japan is far from being over – asa matter of fact, unfortunately, it may very well just be starting. The earthquake and the tsunamis it created cut down power supply throughout a major part of Japan, and so the cooling system of several power plants was unable to do its job.

As a result, the radiation level at the Fukishima power plant is about 1000 times bigger than the accepted level, and technicians are desperately trying to figure out ways to prevent a meltdown, which would have catastrophic results; one way to do this would be to release steam that has been vaporized by heat from the nuclear core, which would lower the pressure, and thus, the temperature.

“It’s possible that radioactive material in the reactor vessel could leak outside but the amount is expected to be small and the wind blowing towards the sea will be considered,” Chief Cabinet Secretary Yukio Edano told a news conference.

The earthquake which shook Japan to its very core caused all sorts of issues, and this latest nuclear problem is extremely hard to tackle. The good news however, is that eleven reactors close to the epicenter shut themselves down when they sensed the earthquake.

“Reactors shut themselves down automatically when something called ‘ground acceleration’ is registered at a certain point, which is usually quite small. It will instantly drop control rods into the [nuclear] core,” Professor Tim Albram, a nuclear fuel engineer at the University of Manchester in the U.K., explained to the press.

How this whole situation will be handled remains to be seen, but things seem pretty dire at the moment; hopefully though, there will be no further complications, as Japan has already seen too many during these two days.