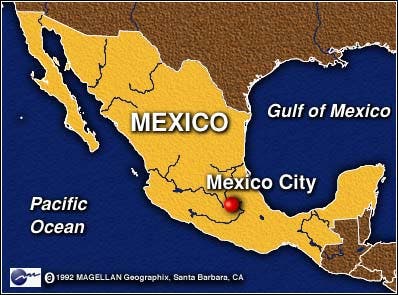 Mexico was hit on Thursday by a big 6.5 earthquake, but recent reports state only minor damage, although people have been sent terrified in the streets. The 6.5 earthquake struck southern and central areas of the country.

Unlike the major 9.0 earthquake from Japan and the more recent one, this temblor took place at a big depth, below the crust; this means there isn’t much of a tsunami risk, due to reduced influence of the surface waves.

Governor Javier Duarte de Ochoa indicated there were no reports of damage in oil-producing Veracruz. “Veracruz is completely quiet without problems,” he told state television. “It was felt all over the state, but nothing major happened. It was only a scare.”

The magnitude of the Mexico earthquake is being revaluated by researchers from all around the world, and there is a good chance it will be estimated at 6.7, but that doesn’t change the facts much; buildings moves, people were scared, but aside from that, not so much happened. Marcelo Ebrard Casaubon, Mexico City’s chief of government, reported on Twitter that a survey of the city concluded no damage was caused by the quake.