by Tibi Puiu
in Robotics, Science, Space
Reading Time: 3 mins read
A A

Satellite deployments make up most of the space launches in any given year, however it’s also a highly risky operation. Every satellite launch costs around $10,000 per pound, and basically it’s fairly common for the total cost of a satellite to jump in the tens of millions of dollars range. Currently, in the geosynchronous orbit there are literary hundreds of billions of dollars worth of space junk – satellites which have malfunctioned and simply float about pointless. The Pentagon was looking to harness this junk somehow and make the best out of it, so the Phoenix program was born.

DARPA‘s idea is to send a recycling system, comprised of a primary Tender/Servicer satellite and multiple smaller mini-satellites called ‘Satlets”. About 90% of the satellite fails are due to the malfuctioning of a single component – so, a single damanged solar panel or antena could mean the end of tens of millions of dollars worth of investment. This is where the Phoenix comes in play though.

According to the engineers who designed it, the harvester would approach a dead satellite, rip off any functioning part and then hand them over to the satlets, who in turn would then used them for building a new satellite or a repair/upgrade an existing one. NASA says about 100 dead satellites are drifting about 25 thousand miles out, and many may have valuable parts that can be re-used, like antennas. Other satellites could be repaired or have their systems upgraded, essentially creating new units. Private contractors can begin submitting proposals in December, with work beginning as early as next year.

There’s one big problem the Phoenix team needs to overcome, though – satellites aren’t made to be dissembled. A satellite’s components are well hidden inside a rack and case, so the harvester would have to precisely be able to cut and hack through metal for an effective scavenging. t’ll probably all be done through telepresence, with a human on the ground directly controlling the appendages and tools on the harvester satellite. As David Barnhart, DARPA program manager, points out

“This requires new remote imaging and robotics technology and special tools to grip, cut, and modify complex systems, since existing joints are usually molded or welded. Another challenge is developing new remote operating procedures to hold two parts together so a third robotic ‘hand’ can join them with a third part, such as a fastener, all in zero gravity. For a person operating such robotics, the complexity is similar to trying to assemble via remote control multiple Legos at the same time while looking through a telescope.”

Of course, the Phoenix system could also have potential military applications. It would be fairly simple for the system’s harvester to whack and hack other satellites and put it out of game. Either way, if used for more constructive purposes the Phoenix is indeed a brilliant idea, one which might save a lot of time and money, and allow the industry to grow even further. 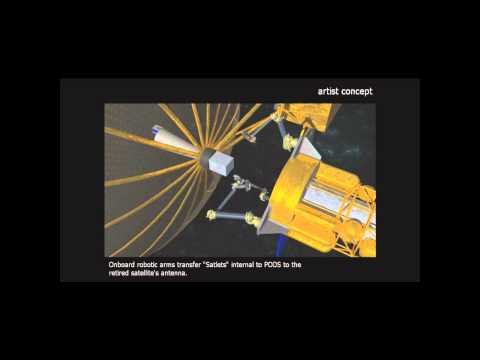