By piecing together data from across the electromagnetic spectrum, NASA researchers have created the most detailed image of the Crab Nebula to date.

Languishing in space some six and a half thousand light years away from Earth in the constellation Taurus are the remnants of humanity’s first witnessed supernova — the Crab Nebula. The nebula was noted by Chinese astronomers in 1054 (when the parent star went boom), and currently boasts a super-dense neutron star that does a full rotation every 33 milliseconds and shoots out massive beams of electromagnetic energy from its poles as it does — in other words, a pulsar. The nebula itself is the product of the original material ejected before and during the supernova, bits and pieces of which are spurred outward by the pulsar’s energy and stellar wind.

A lot of work went into making the image. Astronomers put together data from five different telescopes whose sensors span the electromagnetic spectrum: radio waves recorded by the Karl G. Jansky Very Large Array (VLA), which were colored red. This color shows the winds generated by the pulsar.

XMM-Newton recorded ultraviolet (blue), along with the Chandra X-ray Observatory which picked up the X-ray glow (purple), show the cloud of energized electrons generated by the rapidly rotating pulsar.

The VLA, Hubble, and Chandra recordings were taken almost at the same time in November 2012. The data was then crunched and analyzed by a team of scientists led by Gloria Dubner of the Institute of Astronomy and Physics (IAFE), the National Council of Scientific Research (CONICET), and the University of Buenos Aires in Argentina.

They findings will be published in the Astrophysical Journal. 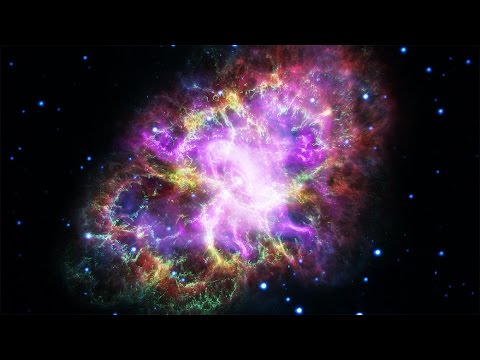