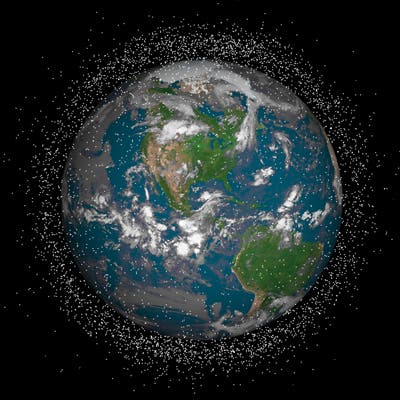 Junk is not only limited to our planet, we have a problem with space pollution as well. In 1978, a brilliant NASA researcher named Donald Kessler predicted that a collision between two pieces of space junk could trigger a cascade of further impacts, which would create a significant quantity of debris which would then cause major trouble.

He pointed out that when the rate at which the debris forms is larger than the one at which it de-orbits, the Earth would be permanently surrounded by belts of junk, a scenario which is now known as the Kessler syndrome. By some estimates, the Kessler syndrome is already upon us, or very close to it. In January 2009, a collision between the Iridium 33 and Cosmos 2251 satellites created exactly this type of scenario, and two years later, the Chinese intentionally destroyed one of their own satellites to test an anti-satellite weapon.

Today, the European Space Agency’s Earth observing satellite, Envisat, orbits at about the same height at which these impacts took place, and it is constantly threatened by impacts.

Today, James Mason at NASA Ames Research Center near Palo Alto and his team announced a possible solution to this problem: the idea is to zap these pieces of garbage with a laser, slowing them down so they will eventually de-orbit. Of course, the US and China already have the technology to take on such a mission with their anti-satellite weapons, and we will probably see it in use not long from now, because it seems it will be only a matter of time until spatial junk debris causes some serious havoc.