by Mihai Andrei
in Animals, Psychology
Reading Time: 3 mins read
A A
Share on FacebookShare on TwitterSubmit to Reddit

Not as unique as we thought

An “emotionally competent” young ape rushes to hug another juvenile that has just been attacked.

I think the idea of animals doing something “like humans” is pretty outdated as it is – so many things that we thought were unique to us have been proven to be if not common than at least… not unique. Here’s just a short list of those things (you can easily find more):

Again, this is just a short list, but I hope I’ve made my point. Now, researchers working at an African sanctuary have found that young bonobos cuddle and calm their friends when they went through a trauma.

Researchers capture footage showing “emotionally competent” young apes rushing to hug other juveniles that were screaming after being attacked. Bonobos who were more empathic were more likely to jump and help relief other members.

“It’s almost as if one first needs to have one’s own emotional house in order before one is ready to visit the emotional house of another.”, said Prof Frans de Waal from Yerkes National Primate Research Center at Emory University in Atlanta. “This is true for children, and apparently also for bonobos.”

To make this even more interesting, Dr Clay also oberved another interesting aspect. The Olola ya Bonoboo sanctuary is home to many bonobo victims of bushmeat hunting – apes which were taken from their families at a very young age. These youngsters are cared for by humans, and after what usually takes a few years of rehabilitation, they are transfered to an enclosure with another group of bonobos. Dr. Clay reported that just like human orphans, orphan bonobos have a much harder time managing their emotions.

After a fight, Dr Clay explained, these orphan apes “would be very upset, screaming for minutes”.

“Mother-reared juveniles would recover and snap out of it in seconds,” she added.

Over 370 post-distress interactions were observed; some 318 cause by fighting and 55 that were caused by throwing tantrums. Researchers found that typically, the better a bonobo was at controlling his own emotions, the more likely he was to console his friends – a trend which is also observed in humans. 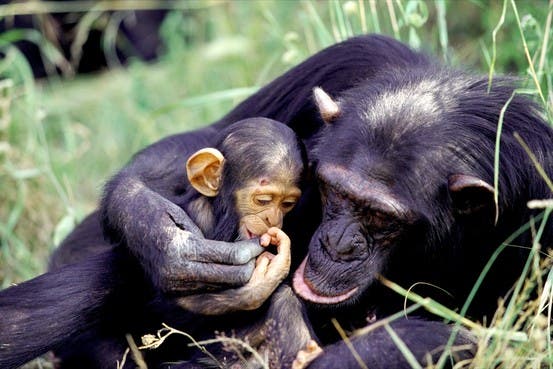 Apparently, this news caused quite a stir, and many people were surprised that apes behave in such a “human like” fashion.

“But they are our closest relatives, so personally I would argue that the best guess of their emotions is that they’d be the same as our own in a similar situation.”, explained Richard Byrne, a professor of evolutionary psychology at the University of St Andrews.