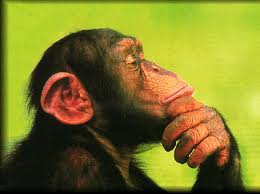 Our close primate relatives, chimpanzees, have been constantly amazing us with their incredible cognitive abilities and personality traits that are so similar to our own. If you believe much of what you undertake today is limited to human cognition only, think again. Chimps do it too – thinking about thinking that is, as the findings of a recent research by scientists at Georgia State University and the University at Buffalo show.

Chimps are our closest relatives, sharing 98% of the human genome, which might explain a bit why their social, cognitive and even emotional display is remarkably similar to that found in humans. Chimps have been shown to be self-aware (possess consciousness), have a sense of fairness, solve puzzles just for fun and even hold elections!

That’s remarkably human-like, however this recent demonstration of chimp metacognition – “thinking about thinking” or “knowing about knowing” – puts things into a whole new perspective.  Though a term that’s both thrown loosely in educational psychology discussions and discouraging at the same time, since not a lot of people know what it means, metacognition in itself represents nothing new, but highlights an important hallmark of intelligence. It’s believed metacognition plays a fundamental role in learning, since it’s only when you begin to rationalize your train of thought that you can begin to control what goes on in your environment and project your thoughts into actions. Activities such as planning how to approach a given learning task, monitoring comprehension, and evaluating progress toward the completion of a task are metacognitive in nature.

In order to assess a chimps ability to recognize one’s own cognitive states, the researchers devised an experiment to query animals about their states of knowing or not knowing. Chimps at Georgia State’s LRC, like some in other labs, have been trained  to use a language-like system of symbols to name things, which came really handy later on in communicating their thoughts and ideas.

The chimps were tasked with naming which food was hidden in a particular location, by typing the symbol for the respective type of food. For instance, if a banana was hidden, the chimp would report this fact by pressing the banana symbol on symbols keyboard, and in the process would also gain the food.

But then, the researchers provided chimpanzees either with complete or incomplete information about the identity of the food rewards.

So, basically the chimps named the food items when they that these were there, and sought them to be sure when they needed more information before naming them.

“This pattern of behavior reflects a controlled information-seeking capacity that serves to support intelligent responding, and it strongly suggests that our closest living relative has metacognitive abilities closely related to those of humans,” the researchers note.

The findings are important not just because it proves yet another important cognitive trait, thought to be solely reserved to humans, is present in non-human primates as well, but because it also may help shed light on the emergence of self-reflective mind during humans’ cognitive evolution. The paper was published in the the journal Psychological Science of the Association for Psychological Science.