Chimpanzees have a sense of fairness

by Mihai Andrei
in Animals, Psychology
Reading Time: 3 mins read
A A
Share on FacebookShare on TwitterSubmit to Reddit

Chimpanzees have the same sense of fair-play as humans do, explain researchers who played the Ultimatum game with them – it’s the first time such a trait was observed in a non-human species. 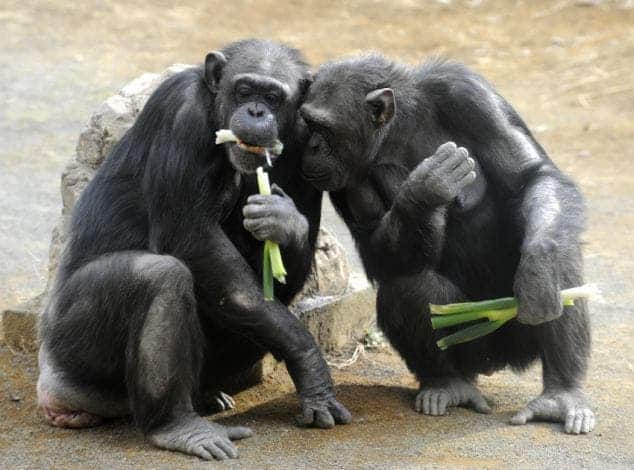 The Ultimatum game is a simple game often used in economy game theory in which the two players involved interact to decide how to split a sum of money that is given to them; the rules are simple: the first person decides on how to split a sum of money, and the second player can agree or decline. If the second player agrees, then they split it that way, but if he disagrees, none of them get anything.

The results suggest that much like humans, who as a species have an aversion towards unfairness (though as individuals, that can be quite different), chimps like fair play.

“We used the Ultimatum Game because it is the gold standard to determine the human sense of fairness. In the game, one individual needs to propose a reward division to another individual and then have that individual accept the proposition before both can obtain the rewards,” says Darby Proctor of the Yerkes National Primate Research Center at Emory University.

When humans play the game, they are quite generous, most of the time going for a 50-50 split, even though typically, the second player accepts any amount over 25 percent. The same thing was observed in chimps.

“Humans typically offer generous portions, such as 50 percent of the reward, to their partners, and that’s exactly what we recorded in our study with chimpanzees.”

The team analyzed six adult chimpanzees and 20 human children aged 3-7 years old, creating a modified version of the Ultimatum game; one individual chose between two differently colored tokens that, with the partner’s cooperation, could be exchanged for rewards. A token offered equal rewards to both players while another favored the individual at the expense of the partner.

Both the chimpanzees and the children reacted in accord to their basic nature: if cooperation is involved, they would split the entire reward equally with their partner.  However, when the partner was passive and had no chance to reject the offer, both groups chose the selfish option – giving another indication of their basic nature.

Until our study, the behavioral economics community assumed the Ultimatum Game could not be played with animals or that animals would choose only the most selfish option while playing,” says Yerkes’s Frans de Waal. “We’ve concluded that chimpanzees not only get very close to the human sense of fairness, but the animals may actually have exactly the same preferences as our own species.”