by Tibi Puiu
in Animals, Biology
Reading Time: 5 mins read
A A
Share on FacebookShare on TwitterSubmit to Reddit

Elections in the States are currently topping headlines all over the world, as people debate over their favorite candidate and the direction this country is heading towards. Still, as always, elections seemed to be plagued by scandals, lies or manipulation. Yes, democracy is far from being perfect, the alternatives aren’t any better either. I don’t mean to stir into politics, especially on a science blog, however progress, one of the main aims of science along with absolute truth, is directly dependent on social structure. So, how can we improve democracy? It’s never a bad idea to return to the roots of things and see what we can pick up. No, I’m not talking about ancient Greece, but about nature!

Humans aren’t the only beings that employ a democratic social structure. Surprised? While most social animals employ a sort of despotic, alpha male chain of command in their social structure, some rely on shared decision making. Red deer herds, for instance, don’t change their grazing grounds or move about anywhere for that matter until 60% of the heard’s members had gotten up – in a way, it’s like they vote with their hoofs.

Chimpanzees, our closest biological relatives, sharing roughly 98 percent of our genome, need support from the females in order to reach the top of hierarchy. Yes, in some cases the more despotic chimpanzee males of the group rise to power through brute force, but most of the time they end up exiled or even killed by their group. Researchers studying chimpanzee social dynamics found that most leaders were actually quite small, and were of the supporting type – grooming their allies, sharing meat and so on. Similar behavior has been found in baboons as well.

Decision making by group  consensus has been observe in birds as well. Flocks of pigeons, for instance, have complex social hierarchies in which even low-ranking birds can vote on the flock’s next flight. However, maybe the most fascinating display of shared group decision can be found in insects, particularly in honeybees.

How would a presidential debate look like with a honeybee queen election model?

Now, you may think that in a honeybee colony the queen bee is all dominant and is responsible for all decision making. In reality,  essentially queen bees are just egg-laying machines, leaving the grunt work of running the hive to workers and drones.  Thomas Seeley, an entomologist at Cornell University, described in 2011 how scout bees perform a waggle dance to pitch future nesting sites, where dozens may compete in trying to sway the colony’s decision. Thus when the time has come for the colony to move, the masses are swayed towards a particular site where the number of dances is high enough. Funny enough, scouts that stubbornly insist on dancing for an obviously less popular site and sort of headbutted. A most interesting display of debate. Seeley also wrote a most interesting book on the subject, which I personally recommend, called Honeybee Democracy.

David Tarpy, an entomologist at NC State University, is more interested in queen bees than grunts, and studied how these are elected. Typically, when a swarm moves to a new colony site, the old queen bee flocks along with the grunts, but some stay behind. In this case, the colony now needs a new queen, which emerges from one of the larvae left behind that was fed with the royal juice needed to turn them into queens. If the remaining hive is too small, the first potential queen to emerge from her royal cell kills all of the other potential queens waiting to emerge. Far from being an acceptable model for humans, despite history has seen its fair share… 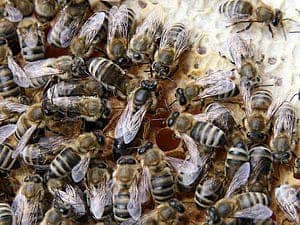 If the hive is big enough, when the first potential queen emerges, workers prevent her from killing the other potential queens. The worker bees trick the queen bees and only allow two queen bees to surface at one time. These two face each other off, and the winner is left to fight the next emerging queen, and so on until one tops. The losing queen bees are killed and thrown out of the hive. Don’t be mistaken, however, this isn’t some brutal cage fight where the biggest, meanest, toughest insect wins.

Tarpy and colleagues staged some elections after they removed queens from their larval cells at different stages so that some were more mature than others and hence would be able to produce more eggs later on. He staged 66 elections, 27 of which were between two high-quality, high-egg-potential candidates; 16 were between one high-quality and one low-quality queen; and 23 were between two low-quality queens. The bigger, physically stronger of the queens always won. When the workers are allowed into the mix, however, the winner tends to be no bigger than the loser. Somehow the workers are influencing the dynamics of the election.

Not too many animals employ shared consensus decisions, despite scientists believe it to be more profitable for groups than accepting the ‘unshared’ decision of a single dominant member. The core of this behavior, it seems, lies in information. A shared decision is better when more information and ‘more heads’ are employed in the process. What happens when that information is inaccurate, however? Humans have made democracy so complex simply because we in term are complex as well.  We’ve evolved sophisticated communication like speech or writing, but instead of facilitating decision making however, humans often make it even more complicated. Yes, humans are  far from sharing the honeybee hive-mind. Democracy works for honeybees and other animals, despite their primitive nature, because the information each individual provides is accurate or if not accurate, it is provided with the best intentions.

So, a good community-driven, shared decision happens when its members have access to accurate information and are able to assess the situation for the greater good. The take away is pretty clear, democracy will only shine and reflect the principles and values it holds in theory when information ceases to be maliciously scattered by others for their personal gain in manipulating the masses. We might be far away from this model, but nature proves that it works.