Is someone chopping onions?

Common dolphins have been seen to aid a dying companion, trying as hard as they could to support him and help him breathe. 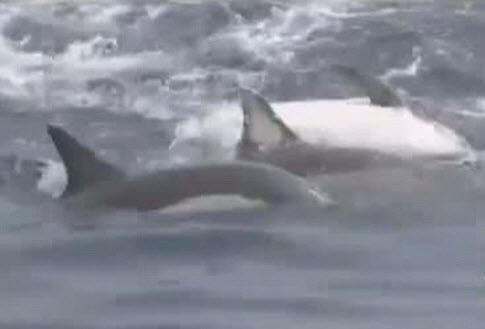 This is the first time that a group of dolphins has been observed trying to aid a dying companion; five individual dolphins formed a raft with their bodies to keep their injured friend afloat. Healthy cetaceans (a groups that includes dolphins and whales) have been known to provide supportive care to individuals before, but this is the first time such a severe case was studied.

What makes this all the more remarkable is that it wasn’t one individual or two trying to help – the entire group pitched in. 11 dolphins gathered to help their diseased companion, showing fantastic communication skills and an overall understanding of the situation that just baffles. What’s even more shocking to me is that if you watch the video, it honestly looks like they’re asking the humans to intervene. Out of all the places in the ocean, they brought their friend directly to the boat! This can be no coincidence. They seemed to circle back and keep by the side of the boat, and it seems to be one more indication of the dolphins understanding of another species’ intelligence.

Sadly though, their valliant efforts were in vain, and a few minutes later, the stricken dolphin appeared to die, its body hanging vertically in the water, with its head above the surface. It wasn’t breathing. Five group members continued to interact with the dead dolphin’s body, rubbing and touching it, or swimming underneath, releasing bubbles onto it. They carried this out for quite a while… a behaviour sometimes observed with humans.

“It does look like quite a sophisticated way of keeping the companion up in the water,” says Karen McComb at the University of Sussex in Brighton, UK. Such helping behaviours are only seen in intelligent, long-lived social animals. In most species, injured animals are quickly left behind.

Obviously, we have to redefine what we think about animals and intelligence: Dolphins should be recognized as non-humans persons. They talk like humans, they hang out in cliques, they have sex drives, with some being actually kinky, and they saved human lives intentionally – several times. Also, it has been suggested for quite a while that dolphins recognize humans as an intelligent species, not only helping us, but also, sometimes asking for our help. Here’s a video of a dolphin caught in a fishing hook asking for divers help. So I’d like to discuss an ethical question.

If the dolphins were in fact trying to ask for the humans help for their companion, shouldn’t they try to help? Of course, the general rule is you don’t intervene and you let nature take its course. But if we’re dealing with intelligent, social creatures which are more like us than we’d care to admit, aren’t we obliged to help them when we can? This is definitely something worth thinking about.

The study was published here