by Tibi Puiu
in Health & Medicine, Oceanography, Research, Studies
Reading Time: 3 mins read
A A
Share on FacebookShare on TwitterSubmit to Reddit

A team of researchers have shown in a recently released paper published in the journal Royal Society Biology Letters that dolphins actually communicate with each other through a process much in the way humans use. What has been mistaken for a long time as plain whisteling has now been proven to be a much more complex means of communication. 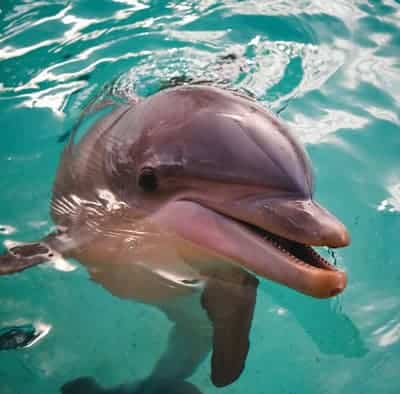 Sure, dolphins sound like whistling, but the sound is made differently than previously thought – by vibrations of tissues in their nasal cavities that are analogous to our vocal cords, identical the the operation of vocal folds by humans and many other land-based animals.

“When we or animals are whistling, the tune is defined by the resonance frequency of some air cavity,” said Peter Madsen, lead author of the research.”The problem is that when dolphins dive, their air cavities are compressed due to the increasing ambient pressure, which means that they would produce a higher and higher pitch the deeper they dive if they actually whistle.”

The research was sprung by the curious mystery around how dolphins are able to signal their signature sound to identify themselves with their peer even in deep water were the frequency of sound is different. If dolphins indeed communicated through whistling, the pitch would cause the identity call to sound different, which is not the case.

Researchers capitalized on previous data from 1977, which contained the recording of 12-year-old male bottlenose dolphin (Tursiops truncatus). At the time, the researchers had the dolphin breathe a mixture of helium and oxygen called heliox. When humans breathe the concoction, it causes them to sound in a high-pitch manner, commonly referred to as the “Donald Duck”. The mixture has a sound speed 1.74 times higher than air. In this medium, the pitch of the tune will thus be 1.74 higher while whistling than whistling in air.

“We found that the dolphin does not change pitch when it is producing sound in heliox, which means that its pitch is not defined by the size of its nasal air cavities, and hence that it is not whistling,” Madsen said. “Rather, it makes sound by making connective tissue in the nose vibrate at the frequency it wishes to produce by adjusting the muscular tension and air flow over the tissue.”

“That is the same way that we humans make sound with our vocal cords to speak,” he added.

It doesn’t mean, of course, that dolphins can talk, only that they can communicate through the same process. Dolphins use an intricate set of clicking and chirps sounds, besides whistling, which they use to communicate between themselves, like most commonly their identity so that they don’t get lost. Little is known about this code, although a number of researchers are trying to decipher it.

Acoustics engineer John Stuart Reid and Jack Kassewitz of the organization Speak Dolphin have created an instrument known as the CymaScope that reveals detailed structures within sounds, allowing their architecture to be studied pictorially.

“There is strong evidence that dolphins are able to ‘see’ with sound, much like humans use ultrasound to see an unborn child in the mother’s womb,” Kassewitz said. “The CymaScope provides our first glimpse into what the dolphins might be ‘seeing’ with their sounds.”

The researchers believe the finding applies to all toothed whales, since they have similar nasal anatomy and they “all face the same problem of making sound during deep dives.”

I’m pretty sure dolphins would have a few things to say about what happens in the world’s oceans, but that’s another story for when we’re truly prepared to welcome our dolphin overlords, I guess.