Are dolphins that smart? Scientist plays down dolphin ‘genius’ myth

by Tibi Puiu
in Animals, Neurology, Research
Reading Time: 4 mins read
A A 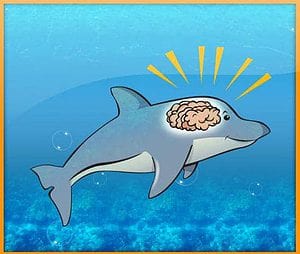 Alongside ourselves and great apes, dolphins are often portrayed as ‘geniuses’ of the animal kingdom. Since the 1950’s, a lot of papers seemingly attest to dolphins’ superior intelligence underlying great problem-solving capabilities and advanced communication capabilities. The latter is a widely launched argument: dolphins can communicate with their peers through sequences of whistles and sounds, and it’s even been found that some dolphins communicate their identity through signature whistles. The fact that they have a sense of individuality may be reason enough to truly class them as very intelligent animals. There is some controversy about dolphin intelligence, however, and some scientists believe dolphins aren’t that ‘special’. In fact, in some respects, dolphins are quite dumb, according to some voices.

Biologist Justin Gregg is one such voice, and in his recently published book “Are dolphins really smart?” he outlines several comparative studies, showing that dolphins aren’t really that smart as they’ve portrayed. For instance, he talks about chickens and dolphins taken side by side; both species engage in complex social behavior, they congregate in large groups, their heart rate increases when they see a peer suffering, they make alarming noises and movements whenever they find a food source or encounter a potential threat, and they’re capable of anticipating future events. On one side, the chicken – an animal which most of us can agree isn’t the sharpest knife in the drawer – and on the other, the dolphin – reigning high on the intelligence pedestal.

“Dolphins are smart”: myth or fact?

Neuroethologist Paul Manger of the University of the Witwatersrand in South Africa is a firm contesting speaker against dolphin ‘special’ intelligence. He has made a number of remarks in his papers downplaying dolphin intelligence, suggesting claims such use of tools and sophisticated language, a particularly superior brain or a self-awareness are nothing but nonsense. Obviously, his claims have garnered him a lot of criticism. There had been actually quite a number of reported written complaints filed to his parent university demanding for his suspension.

Manger, though few other figures from the scientific community support his claims, isn’t easily deterred and stands steadfast – dolphins aren’t special, they’re not particularly smart, and in some cases, they’re quite dumb. Manger claims that dolphins are outdone even by goldfish. When a dolphin is trapped in a net, it makes little effort to escape, a goldfish on the other hand when placed in a bowl will always first attempt to jump. “The idea of the exceptionally intelligent dolphin is a myth,” Manger concludes. Of course, Manger didn’t stop here. He tackles a number of other, what he calls, misconceptions. For instance, some researchers proved that dolphins can differentiate between the concepts of “many” and “few”. No problem, so can yellow mealworms, according to Manger. His debunking continues with things such as brain size and tools use. Of course, he didn’t forget about the much talked about dolphin language system.  It is known that every dolphin can identify itself with its own “signature whistle.” The marine mammals use many other acoustic signals, he adds. But is this truly special? The tail-wagging dance of bees is also very complex, says Gregg.

“It’s probably not the case that dolphins have their own language, which is as complex as human language,” says the expert in animal communication.

“We shouldn’t dismiss decades of peer-reviewed scientific work,” says Lori Marino, a neuroscientist at Emory University in Atlanta. Indeed, a simple query on Google Scholar renders over 23,000 published papers relating to “dolphin intelligence”, some with findings that say dolphins aren’t that special, but most in favor of their super intelligence assumption.

“To put it bluntly, most of that is bullshit,” says Karsten Brensing, a marine biologist with the organization Whale and Dolphin Conservation (WDC). Brensing bashes  Manger and Gregg’s conclusions, objecting that the two lose sight of the bigger picture and fail to make a holistic approach. “You can use similar arguments to prove that people aren’t intelligent,” said Brensing referring to the duo’s comparison studies of individual dolphin traits.

While Manger and Gregg aren’t exactly saying that dolphins are dumb, their stance is clear in one respect: people need to stop calling them special. Manger says he merely wants to prevent the marine mammals from being anthropomorphized. Interpretations of behavior based on “personal bias” are not helpful, says Manger.

“Conservation strategies should not be based on unrealistic expectations,” he adds.

Whether or not Manger and Gregg aren’t touched by bias of their own may be a subject of its own.

The Dolphin Communication Project has an awesome podcast in which  Professor Paul Manger and  Dr. Lori Marino, Senior Lecturer in Neuroscience and Behavioral Biology at Emory University in Atlanta Georgia, were interviewed on the ‘dim dolphin’ subject.

ZME readers, how intelligent do you think dolphins are?