by Tibi Puiu
in Animals, Mind & Brain
Reading Time: 3 mins read
A A
Share on FacebookShare on TwitterSubmit to Reddit

You might be used to seeing birds peck grains as soon as you throw the food in front of them, so it’s no wonder why might find this surprising. University of Vienna established a cognitive experiment centered around a most intelligent type of bird – Cackatoos – and found that they’re capable of self-control, restraining themselves from immediately eating food put at their disposal, despite being highly tempted to do so. The findings suggest that yet another personality trait typically believed to be encountered in humans or primates only is present in other animals as well.

The experiment itself was inspired by a famous psychological experiment from the 1970s that studied self-control ability in babies, in order to see how early on this highly valuable cognitive trait is developed. In the ‘Stanford Marshmallow Experiment’ babies were asked to restrain from eating the marshmallow right in front of them for the time being and were promised another one if they behaved. This is a perfect example of economics decision making, and for many years the ability to foresee a delayed reward has been thought to be encountered in humans only

Now, simply waiting might not seem like much to you, but truth of the matter is it proves the presence of an important cognitive ability which is believed to be encountered in large brained animals only. It’s not only about the ability to control one’s instincts and impulses, but more about foreseeing – the capability of assessing present conditions and establishing whether taking action or staying passive will rend more rewards in the future. 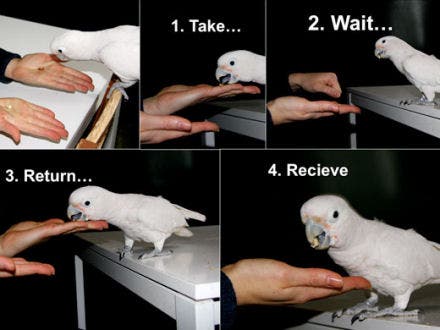 For their experiment, the Austrian researchers chose to study an Indonesian cockatoo species – the Goffin’s cockatoo. The birds were instructed to pick pecan nuts and return them back to the researchers after a time delay. If they were successful and returned the food back without nibbling on it, the birds would then receive cashew nuts – an even greater treat.

“If the initial food item had not been nibbled, the bird received another reward of an even more preferred food type or of a larger quantity than the initial food,” explained researcher Isabelle Laumer (pictured, top of page). “We picked pecan nuts as an initial reward as they are highly liked by the birds and would under normal circumstances be consumed straight away, [but] we found that all 14 of the birds waited for food of higher quality – such as a cashew nut – for up to 80 seconds.”

“They did so, relative not only to the length of delay, but also to the difference in trade value between the ‘currency’ and the ‘merchandise,’ tending to trade their initial items more often for their most preferred food, than for one of intermediate preference value,” she noted.

What’s maybe more impressive is the extent of their self-control. In the marshmallow experiment, babies were faced with the choice of eating the marshmallow placed in front of them. How many of them would have been able to resist the temptation if the food was placed right in their mouths, like in the case of the cackatoos who have no other means of transportation other than their beaks?

“Until recently, birds were considered to lack any self-control. When we found that corvids could wait for delayed food, we speculated which socio-ecological conditions could favor the evolution of such skills. To test our ideas we needed clever birds that are distantly related to corvids. Parrots were the obvious choice and the results on Goffins show that we are on the right track,” said Thomas Bugnyar, one of the study authors.

The study’s findings were reported in a paper published in the journal Biology Letters.