by Mihai Andrei
in Astronomy, Physics, Studies
A A

As I was writing in a previous post, Titan is quite unique, in that aside from our planet it’s the only place in our solar system where significant quantities of liquid are to be found (though most are liquid ethane and methane). That doesn’t seem to make much of a difference considering the chemistry of it, but according to astronomer Mike Brown of the California Institute of Technology (Caltech) mother Earth and Saturn’s moon share another important characteristic: they have common fog. That implies there is an exchange of material between the atmosphere and the planet surface, a phenomenon previously only known to take place on our planet. It also shows there is an active hydrological cycle taking place. 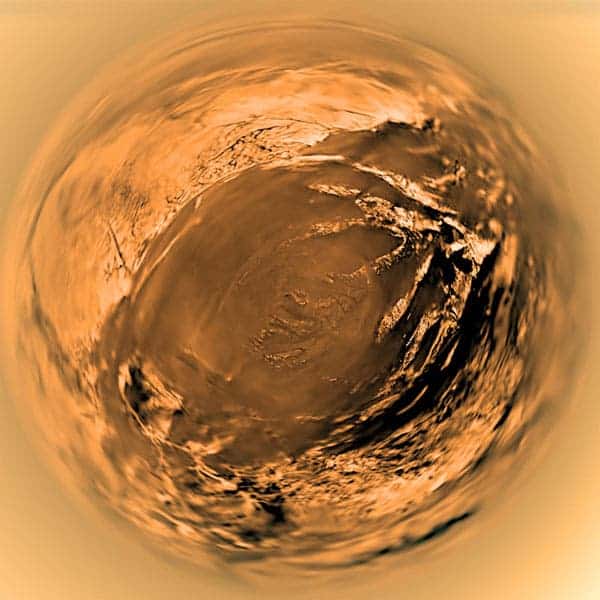 The Cassini probe has once again proven it’s value; the Visual and Infrared Mapping Spectrometer (VIMS) onboard the probe provided the data that eventually led to this conclusion. They found what could be described as isolated clouds at approximately 750 meters above the surface, and not higher, where clouds are usually formed. So the conclusion was simple: they found fog.

“Fog—or clouds, or dew, or condensation in general—can form whenever air reaches about 100 percent humidity,” Brown says. “There are two ways to get there. The first is obvious: add water (on Earth) or methane (on Titan) to the surrounding air. The second is much more common: make the air colder so it can hold less water (or liquid methane), and all of that excess needs to condense.”

He explains that this is the exact same process that causes water droplets to take shape on the outside of a very cool glass.

“That fog you often see at sunrise hugging the ground is caused by ground-level air cooling overnight, to the point where it cannot hang onto its water. As the sun rises and the air heats, the fog goes away.”

However, for some reason, this mechanism doesn’t work on Titan because the planet’s atmosphere causes extremely slow cooling or warming.

“If you were to turn the sun totally off, Titan’s atmosphere would still take something like 100 years to cool down,” Brown says. “Even the coldest parts of the surface are much too warm to ever cause fog to condense.”

He was asked if it could be all about mountain fog, but he rejected this categorically.

“A Titanian mountain would have to be about 15,000 feet high before the air would get cold enough to condense,” he says