Watch the ‘World on Fire’ in this amazing NASA satellite image

On any given day, large areas of the globe are covered in fire.

by Tibi Puiu
in News, Space
Reading Time: 4 mins read
A A
Share on FacebookShare on TwitterSubmit to Reddit

Some fires are so huge, they can be spotted from space. NASA’s satellites always keep an eye on important fires across the world, and the space agency recently released a stunning image to showcase this.

In this image that shows a “world on fire,” each red dot corresponds to a location on Earth where NASA’s thermal bands have detected actively burning fires. As you can see, most of them are concentrated in Africa — most likely these are agricultural fires, deliberately set up to clear the ground and replenish the soil with nutrients. But while these fires improve crops and grasses for livestock, they also produce fumes that choke the air.

North America is also pretty lit, but in this location, most fires are wildfires. The same applies to South America as well, where Chile, in particular, has experienced a large number of wildfires this year — partly fueled by the mega-drought ravaging the country, but also due to the fact that native forests have been turned into flammable tree plantations. In Brazil, the fires are both agricultural and wildfires.

The red dots n Australia are bushfires, which are nothing out of the ordinary during dry seasons. The problem is that Australia is currently in the middle of winter (and a drought) — a sign that climate change is making area hotter and drier, extending bushfire season by as much as two months. In time, bushfires could engulf the whole continent.

The fire map of the world is available in an interactive format on NASA’s Earth Observing System Data and Information System (EOSDIS) Worldview application. This amazing interface enables users to add up to 700 global, full-res layers, resulting in virtually infinite possibilities of representing data. Many of the satellite imagery data is updated within three hours of observation. So, essentially, what you’re seeing is happening ‘right now’.

This particular image was released on August 22, 2018.

On a related note, the following two maps show aerosol movement outputted by the Goddard Earth Observing System Forward Processing (GEOS FP) on August 23, 2018. An aerosol is a suspension of fine solid particles or liquid droplets, in the air or in another gas. Examples of aerosols include fog, dust, forest exudates and geyser steam, as well as smoke and man-made air pollutants. 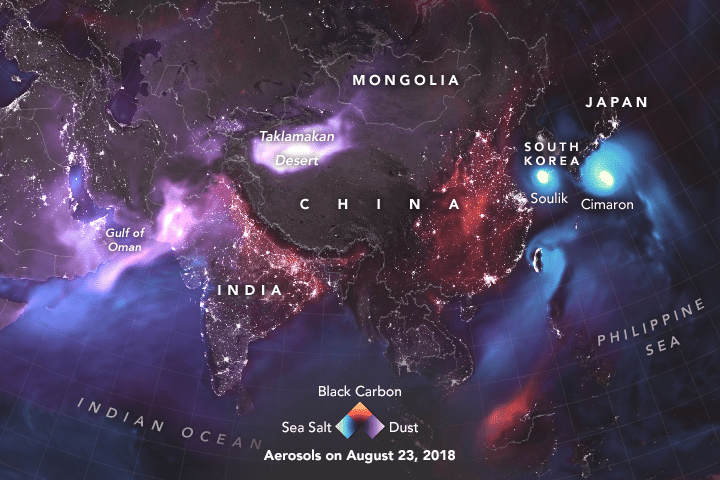 The maps show huge plumes of smoke drifting over North America and Africa, three different tropical cyclones churning in the Pacific Ocean, and large clouds of dust blowing over deserts in Africa and Asia. NASA’s Earth Observatory explains how to read them:

“The storms are visible within giant swirls of sea salt aerosol (blue), which winds loft into the air as part of sea spray. Black carbon particles (red) are among the particles emitted by fires; vehicle and factory emissions are another common source. Particles the model classified as dust are shown in purple. The visualization includes a layer of night light data collected by the day-night band of the Visible Infrared Imaging Radiometer Suite (VIIRS) on Suomi NPP that shows the locations of towns and cities.”

“Some of the events that appear in the visualization were causing pretty serious problems on the ground. On August 23, Hawaiians braced for torrential rains and potentially serious floods and mudslides as Hurricane Lane approached. Meanwhile, twin tropical cyclones—Soulik and Cimaron—were on the verge of lashing South Korea and Japan. The smoke plume over central Africa is a seasonal occurrence and mainly the product of farmers lighting numerous small fires to maintain crop and grazing lands. Most of the smoke over North America came from large wildfires burning in Canada and the United States.”