Cassini Spacecraft To Dive Into Water Plume Of Saturn Moon 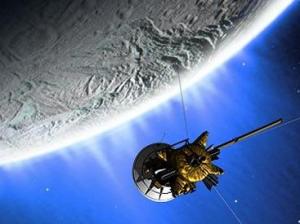 The Cassini spacecraft has made numerous valuable discoveries along the time, such as the ‘building blocks’ of life on Titan, as well as the mountains there, and the partial rings of Saturn, and now scientists eagerly await the dive of the probe into the water plum of Enceladus, a moon of Saturn. This will be an unprecedented flyby, with promising prospects.

It will orbit around uge Old-Faithful-like geysers erupting from giant fractures on the south pole of Enceladus. It will take valuable samples from the water-ice, dust and gas in the plume. These probes will give scientists some insight on how these structures formed.

“This daring flyby requires exquisite technical finesse, but it has the potential to revolutionize our knowledge of the geysers of Enceladus. The Cassini mission team is eager to see the scientific results, and so am I,” said Alan Stern, associate administrator of NASA’s Science Mission Directorate, Washington.

“There are two types of particles coming from Enceladus, one pure water-ice, the other water-ice mixed with other stuff,” said Sascha Kempf, deputy principal investigator for Cassini’s Cosmic Dust Analyzer at the Max Planck Institute for Nuclear Physics in Heidelberg, Germany. “We think the clean water-ice particles are being bounced off the surface and the dirty water-ice particles are coming from inside the moon. This flyby will show us whether this concept is right or wrong.”