An ocean of water on Titan ? 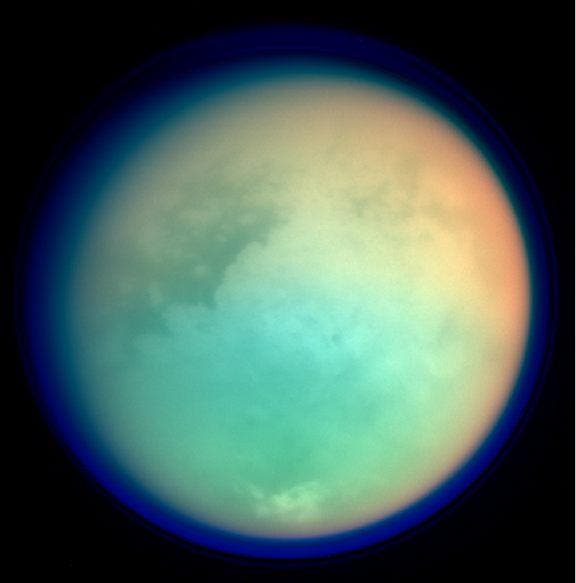 Titan is one strange place; it’s a satellite, but it’s bigger than Mercury, and it’s also the only satellite known to have a dense atmosphere. Furthermore, aside from Earth, it’s the only place where evidence of liquid has been found on the surface. Now, after studying some abnormalities in the rotation of Saturn’s largest moon, researchers believe that there is also an underground ocean, which might even harbor life.

The Titan and the water

Even though Titan is covered with liquid, this liquid is made of liquid methane instead of water, which sparkled a lot of controversy along the years, regarding whether it could hold life or not. However, this could change things dramatically, if it is confirmed that the satellite doesn’t only have water on its surface, but it also has an internal ocean, one of water and ammonia.

Using radar to peer through Titan’s dense atmosphere, the Cassini spacecraft found a number of significant surface features had shifted from their expected positions by up to 19 miles (30 kilometers), which can only suggest that the crust is resting on something liquid. But now, gravitational and radar observations performed by Cassini have suggested even more clues to an underground ocean.

In many ways, Titan is very similar to our Moon. For example, it always has the same face oriented towards the planet. However, what is really strange is the angle (0.3 degrees) at which its axis is tilted. It may not seem like much, but this tilt is actually very high, considering Titan’s moment of inertia, or its resistance to changes to its rotation; one explanation for this seems to be extremely unlikely – that Titan is denser outside than inside.

“This is in contradiction with all we know about others planets and satellites and planetary formation processes,” said researcher Rose-Marie Baland, a planetary scientist at the Royal Observatory of Belgium in Brussels.

Another more likely theory is that Titan is not solid all the way through, but has an icy shell overlying a liquid water ocean, an icy mantle and an icy, rocky core (yeah, pretty much everything is icy when you’re that far away from the Sun). According to this research, which is still in its preliminary phases, there are a number of models that would fit the existant data, with the underground ocean thickness varying anywhere from three to 265 miles (five to 425 km), as well as for the icy shell, anywhere from 90 to 125 miles (150 to 200 km).

“We found it very exciting to use some measurements that seem in contradiction and to try to reconcile them,” Baland said. “It was like putting together pieces of a puzzle.”

However, it is still not fully clear that Titan does have an ocean of underground water – the anomaly could also be explained by a recent collision, with a comet or an asteroid for example.

“Our analysis strengthens the possibility that Titan has a subsurface ocean, but it does not prove it undoubtedly,” Baland told Astrobiology Magazine. “So there is still work to do.”

Why does this have to do with the Astrobiology Magazine ? Well, since life needs water to survive (at least from what we know so far), if Titan does have water, even underground, it would greatly increase the chances of finding life on it. This also holds promise for future research, and Baland announced that she and her colleagues will study Jupiter’s four largest satellites, the Galilean moons — Io, Europa, Ganymede and Callisto.

“The measurement of the obliquity of Europe or Ganymede could bring additional evidence for subsurface liquid layers,” Baland said.