by Tibi Puiu
in Environment, Studies, World Problems
Reading Time: 3 mins read
A A
Share on FacebookShare on TwitterSubmit to Reddit 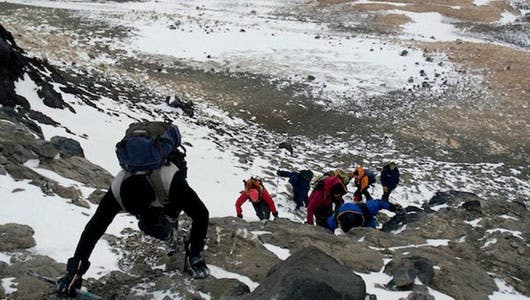 Antarctica is home to one of harshest environments in the world, but exactly because of this it exhibit a unique set of fauna to the world. As the local arctic climate warms, however, and an increasing number of tourists and scientists are bringing in thousands of seeds, once pristine ecosystems are now at risk.

Seeds and plant materials, quite practically “alien” for the last untouched continent of the world, are brought in constantly to the Arctic shore via the shoes and clothing of well-meaning scientists, ecotourists and support staff. And as the number of people visiting the content dramatically increases year after year, the risk of ecosystem contamination grows as well. During the 2007-08 summer season alone, about 33,000 tourists and 7,000 scientists (including support personnel) arrived in Antarctica.

Steven Chown of Stellenbosch University in South Africa and colleagues vacuumed clothes, bags and other travel gear of about 850 people, and found 2,686 plant seeds, which they went on to identify by species or family using photographs from plant databases. It’s estimated that around 70,000 seeds were brought in by visitors to the continent during the ’07-’08 summer season time frame.

Although many would argue that these seeds would’ve never survive the harsh antarctic environment, the researchers claim that the climate has changed dramatically in past few decades. Many of the stowed away seeds actually hail from the Arctic or Alps region, where they’re already accustomed to cold climates, making them good candidates for surviving and thriving in the harsh polar environment.

“Many people have thought Antarctica is just an ice-covered place, there’s no chance that things are going to establish there, but of course that’s not true,” Chown said. “One of the things that surprised us all was simply the scope of the numbers of seeds coming into the continent.”

To demonstrate how invasive plant species area already affecting the antarctic environment, the researchers reported the fates of nearby sub-Antarctic islands, where plants such as dandelions and mouse-eared chickweed have sprung up all over the place.

Although the study focused on invasive plants, animals could become a greater problem on the Antarctic islands as the climate warms, scientists said.

“If rodents ever got in, they’d be a real pest because rats have a habit of feeding on birds — and there’s huge, vast bird colonies in Antarctica,” Chown said. Even penguins might be at risk. “Penguins are more feisty than others, and rats don’t tend to feed on penguins. But if they were desperate they’d have a go.”

The reseachers’ findings were reported Monday in the journal Proceedings of the National Academy of Sciences.