by Henry Conrad
in Research, Technology
Reading Time: 3 mins read
A A
Share on FacebookShare on TwitterSubmit to Reddit

Scientists and researchers at the University College of London (UCL) have built a self-healing computer that may end computer crashes forever, according to the New Scientist.

Called a “systemic computer,” the machine — which is being developed by computer scientist, Dr. Peter Bentley, and UCL research engineer, Christos Sakellariou — is now operating, apparently crash-free, at the UCL campus.

New Scientist reveals that the core design of the computer takes its cue from “the apparent randomness found in nature.”   The machine can instantly recover from crashes by repairing corrupted data. 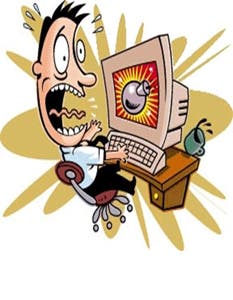 Observers have noted that the UCL computer’s revolutionary design may one day prove useful for systems that rely on computers to perform mission critical tasks — such as those in hospitals, aircraft, and various phone services also offered by RingCentral in calamity-prone areas.

The new technology can have a similarly beneficial impact on business and banking systems, which rely on massive computer networks to manage their financial transactions.  The Royal Bank of Scotland, for instance, had to set aside more than £100 million to compensate the cost of the customers who lost money when the bank’s computer system crashed in June last year.

One at a time

Typically, computers will course through data in sequential order.  They execute one instruction at a time, fetching data from the memory and executing its command before storing the computation in the memory.  The process is repeated again and again until the list of instructions is completed.  Computers perform this process under the control of a sequential timer called a program counter.

This sequential system is excellent for crunching numbers, but does not lend itself well to tasks that require simultaneous operations.  “Even when it feels like your computer is running all your software at the same time, it is just pretending to do that, flicking its attention very quickly between each program,” Dr. Bentley told the New Scientist.

Dr. Bentley asserts that, because the typical computer operates on a sequential system, it is ill-suited to modelling natural processes, such as how neurons work and how bees swarm.  “Nature isn’t like that,” Dr. Bentley says.  “Its processes are distributed, decentralised, and probablistic.  And they are fault tolerant, able to heal themselves.  A computer should be able to do that,” he adds.

Dr. Bentley and Sakellariou have designed the UCL computer so that data and instructions are combined.  The instructions are stored redundantly across the machine’s various systems.  Each system, in turn, is self-reliant and has memory containing context-sensitive data.  This means it can only interact with other, similar systems.

The New Scientist notes that, while other operating systems crash when they fail to access a bit of memory, the same is not true for the UCL systemic computer.  The UCL machine’s design precludes crashing.  When one system is damaged, the machine can instantly repair itself by accessing the necessary data and instructions from other systems in the pool.

Rather than relying on a program counter, the UCL computer uses a pseudo-random number generator which is designed to mimic nature’s randomness.  The systems that comprise the pool then carry out instructions simultaneously, with no single system taking precedence over others.

“The systems interact in parallel, and randomly, and the result of a computation simply emerges from those interactions,” Dr.Bentley explains.

The UCL computer doesn’t sound like it should work, the New Scientist observes, but it does —  and it works much faster than expected.  Dr. Bentley and Mr. Sakellariou are presently working on teaching the computer to rewrite its own code in response to changes in its enviroment, through machine learning.