by Mihai Andrei
in Physics, Research

The Large Hadron Collider at CERN has taken another step towards its goal of finding the so called ‘god particle‘: it recently produced the highest temperatures ever obtained through a science experiment. The day before yesterday, 7 November was a big one at the LHC, as the particle collider started smashing lead ions head-on instead of the proton – proton collisions that usually take place there.

The result was a series of what is called mini big bangs: dense fireballs with temperatures of over 10 trillion Celsius degrees! At this kind of temperatures and energies, the nuclei of atoms start to melt in their constituend parts, quarks and gluons, and the result is called a quark-gluon plasma.

One of the primary goals of the Large Hadron Collider is to go back further and further in time, closer to the ‘birth’ of the Universe. The theory of quantum chromodynamics tells us that as we ‘travel’ in the past more and more, the strength of strong interactions drops fast and reaches zero; the process is called “asymptotic freedom”, and it brought David Politzer, Frank Wilczek and David Gross a Nobel Prize in 2004. 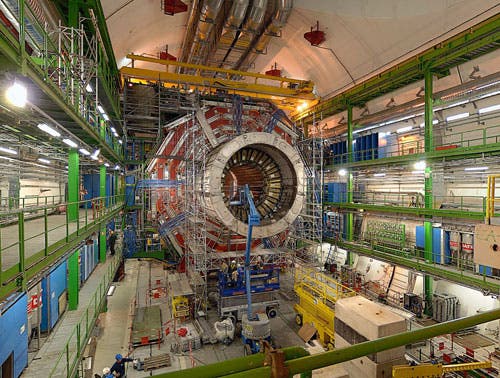 The quark-gluon plasma has been studied in great detail at the Relativistic Heavy Ion Collider (RHIC) at Upton, New York, which produced temperatures of 4 trillion degrees Celsius. These collisions will allow scientists to look at the world in a way they never could have before, showing how the Universe was about a millionth of a second after the big bang. One can only wonder what answers this plasma has to offer, and it already produced a huge surprise, acting like a perfect liquid instead of a gas, as expected. Still, one thing’s for sure: the Large Hadron Collider is producing more and more results each month, and whether it confirms current theories or proves them wrong, science will benefit greatly from this particle collider