Higgs Boson to be unveiled?

by Mihai Andrei
in Physics
Reading Time: 2 mins read
A A
Share on FacebookShare on TwitterSubmit to Reddit

The physicists over at CERN set out to determine if the Higgs Boson is real or not, and they seem poised to figure that out, as rumor spreads about the possible announcement of the elusive particle. 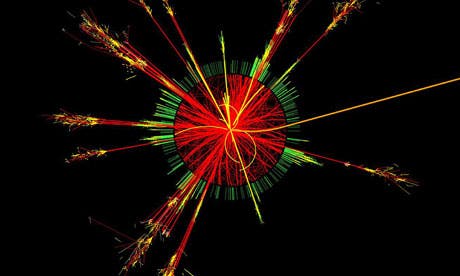 Recently, rumors about the boson exploded, and instead of cooling down, they amplified even more; this Tuesday (tomorrow, 13th December) they will make an important press release, which many believe to be the confirmation of the so-called ‘god particle‘.

I for one am somewhat skeptical; it’s not that I don’t trust the people working at CERN – on the contrary, but there have been rumors before, and people got their hopes up for nothing. For one, the Standard Model, in which the aforementioned particle plays a big role is an extremely ambitious theory – aiming to explain how every particle in this universe interacts with one another. Also, it’s not necessary for the Higgs boson to exist – and that wouldn’t mean the LHC didn’t achieve anything – quite the opposite. It would show that nature has chosen a different path from that suggested by humans, which, as elegant and fitting as it is, may very well be wrong. All in all, tomorrow might be a big day for particle physics and for science.