The Higgs boson was initially called the ‘goddamn particle’ 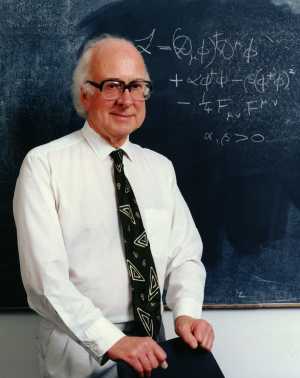 Peter Higgs is not the rockstar type of scientist; the particle physicist rarely gives interviews, despite the fact that he is the one who proposed the existence of a fundamental particle that gives all matter its mass. Almost as mysterious as the particle itself, he simply calls it the “boson named after me”.

Higgs visited Geneva for a peek at the LHC to see how research is going; it should be said, that despite what most people outside physics think, the Large Hadron Collider is not all about the Higgs boson. That particle is just the most popular one. A small part of its popularity probably comes from the media friendly nickname it was given, the “god particle”.

The term is largely believed to belong to Nobel prize winner Leon Lederman; however, it wasn’t his choice actually. Higgs explains:

“He wanted to refer to it as that ‘goddamn particle’ and his editor wouldn’t let him. I find it embarrassing because, though I’m not a believer myself, I think it is the kind of misuse of terminology which I think might offend some people.”

When asked the question that was on everybody’s tongue, what will he do if the goddamn particle is confirmed, Higgs gives an absolutely brilliant answer:

“I shall open a bottle of something,” he says, back in coy mode. A bottle of what? “Champagne,” he says thoughtfully. “Drinking a bottle of whiskey takes a little more time.”

Update: Well it seems like Dr. Higgs most certainly had one of the most satisfying cups of champagne in history, seeing how indeed the Higgs boson fundamental particle has been confirmed by researchers in the summer of 2012, two years after this interview. Cheers, Dr. Higgs!