Thanks to prehistoric humans and modern DNA tools, scientists have cracked a mystery of science.

The endangered European bisons are a mystery of science. These majestic beasts seem to have appeared out of thin air some 11,000 years ago since scientists have been unable to find its direct ancestor. But thanks to modern genetic tools coupled with the artistic wonders of prehistoric humans, we finally found the missing link or the ‘Higgs bison’, as the researchers called him — a word play on the famous Higgs boson whose discovery is heralded as one of the most important in 21st-century physics.

A mystery of science

Before the European bison appeared, all bisons in Europe but also those in North America or Russia’s steps belonged to a species called the steppe bison. After the stepped bison disappeared, the European bison suddenly came in its place but the two aren’t directly related. Previously, DNA sequencing found the European bison’s mitochondrial DNA, which is only passed down from the mother’s side, was very closely related to that of cows. But cows and bison don’t mix. Everyone was completely baffled.

Alan Cooper of the University of Adelaide and colleagues decided to try their luck, too. They gathered ancient bone fragments from 64 steppe bison and were fortunate enough to recover DNA which they sequenced in full. Strikingly, this analysis revealed that some 120,000 years ago the steppe bison and ancient cows interbred creating a new hybrid species which lasted for thousands of years.

This sort of hybridization is very rare, and no one actually took such a scenario very seriously before. Nevertheless, we finally have our missing link in the form of this hybrid bison-cow creature.

“We determined that the European bison, bizarrely enough, is a hybrid between an auroch – which is the ancestor of modern cattle – one of the most ferocious wild animals, and a steppe bison, which ranged all the way across the grasslands of Russia, into Alaska and all the way down to Mexico in the Americas,” Cooper said.

Yet while DNA can tell you a lot about a species’ lineage, it doesn’t tell us how this hybrid must have looked like. But when Dr. Julien Soubrier, a co-author of the new study, asked French cave researchers if there was any chance they saw variety in bison drawings he was met by an “of course” — jackpot!

“We’d never have guessed the cave artists had helpfully painted pictures of both species for us,” Soubrier said.

Two distinct morphologies were sent back by the French researchers. One looks uncannily like the steppe bison and the other must be the missing link, the ‘Higgs bison’. Both drawings, which are 20,000 years old, look like the work of Picasso himself so hats off to the Australian researchers but also the prehistoric artist who helped solve one of the most curious puzzles in science.

“It looks like the cave artists were actually spotting the difference and actually recording them in their art,” said Prof Cooper for the BBC.

“And so the Higgs bison has been hiding in plain sight for all the time, and no-one recognised. The variation in cave art was put down to cultural or stylistic differences.” 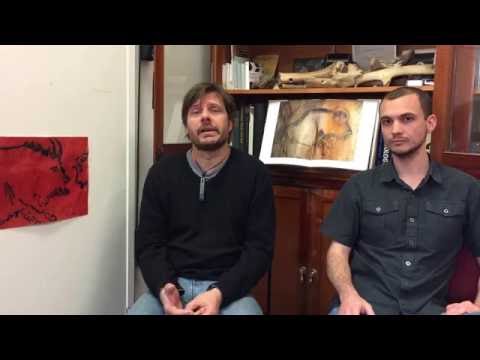