by Tibi Puiu
in Genetics, Health & Medicine, Research, Studies
Reading Time: 3 mins read
A A
Share on FacebookShare on TwitterSubmit to Reddit

Scientists at UK Medical Research Council’s Laboratory of Molecular Biology have successfully managed to create an artificial version of both DNA and RNA, fundamental biomolecules crucial to life. The synthetic nucleic acids are capable of encoding information and passing it on to the next generation, even with changes in the code with the help of an intermediate molecule, thus proving that these can also evolve! Besides the obvious implications in the field of synthetic biology, this breakthrough might greatly help scientists how life may form outside our solar system, as well as how the very first primitive life forms came to be on Earth. 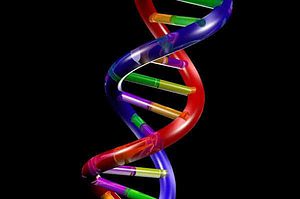 The classic double-helix structure of DNA is like a twisted ladder, where the steps are made from paired nucleobases (RNA is typically a single helix). Its sides are chains of a sugar called deoxyribose (the D in DNA), connected by phosphate groups. The researchers’ synthetic versions use the same bases and the same phosphate groups, however their ladders were made using different sugars. Thus, Dr. Philipp Holliger and colleagues from the MRC Laboratory of Molecular Biology have developed six alternative polymers called xeno-nucleic acids, XNAs, that  can share information with DNA – and one, anhydrohexitol nucleic acid,or HNA, that can undergo directed evolution and fold into biologically useful forms.

“There’s a lot of chemisty that seeks to build alternative nucleic acids, and people have been modifying the bases, the sugars and the backbone, but what we were focusing on was the type of nucleic acid or polymers that would retain the ability to communicate with the natural DNA,” Dr Holliger  said.

Dr Holliger and his colleagues have tweaked  a natural enzyme called polymerase that efficiently transcribes the code of their synthetic DNA to natural DNA and then from that back to another synthetic DNA. The scientists started with a varied pool of polymerases, all slightly different, and all mixed with their own corresponding gene. Researchers observed  some were better at building nucleic acids with the weird sugar backbones than others. By selecting and filtering out the inefficient ones, the scientist quickly evolved enzymes that could assemble XNA strands from DNA ones.

“We’ve been able to show that both heredity – information storage and propagation – and evolution, which are really two hallmarks of life, can be reproduced and implemented in alternative polymers other than DNA and RNA,” Dr Holliger explained.

“There is nothing ‘Goldilocks’ about DNA and RNA – there is no overwhelming functional imperative for genetic systems or biology to be based on these two nucleic acids.”

DNA and RNA form the absolute basis of life, however its still unclear how they were first formed, as it is unlikely a primitive mixture of chemical elements would have suffice without some kind of intermediate stage. What this remarkable research proves is that the two nucleic acids aren’t unique in their abilities and variations could exist somewhere else in the Universe as well, which could branch in life forms significantly different than the ones encountered on Earth. Also, as the researchers conclude, the “construction of genetic systems based on alternative chemical platforms may ultimately lead to the synthesis of novel forms of life”.

Their findings were published in the journal Science.