by livia rusu
in Chemistry, Videos
A A

DNA is widely recognized by its double helix, but if you look at the molecule through a microscope you might be disappointed. That’s because the double helix is an atomic model, and you’d need a really powerful microscope to see the helix. On a grander scale, DNA can take some interesting shapes. Take for instance these images of liquid DNA crystallization taken by artist and biochemist Linden Gledhill, which he then stitched together to form a time-lapse video. Imaging DNA is no easy task, and through this mesmerizing display Gledhill hopes to inspire other scientists and laymen as well to delve deeper into DNA and its significance.

The work was commissioned by the MSSNG project, a program launched by the advocacy organization Autism Speaks. The aim is to sequence the DNA of 10,000 families affected by autism and then publish all the data freely in a open-source fashion.

To capture the stunning displays of DNA crystallization, Gledhill used a professional lab microscope that magnifies up to 1,000 times. But what’s the deal with all those colours? The trick lies in using polarized light. The light thus gets twisted by the DNA crystals, causing an interference in the spectrum.

“It’s actually very cool because few people have really seen images like these before our research groups,” explains Gledhill. “When people see them they ask me, ‘What is that?’ They have no idea and are quite surprised it’s DNA.”

As water evaporates from the edges of DNA samples placed between two glass slides, the structure gradually crystallizes. The dark areas are where there is liquid and no structure but as the molecules become better aligned we see these vivid colors. The whole process was captured in the video you can watch below. 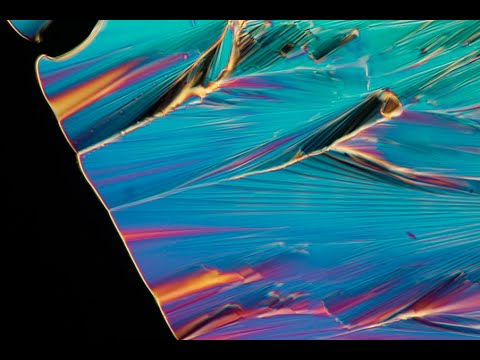