Why some marriages last for life – genuinely so: a genetic and psychological explanaition

Dr. Robert W. Levenson is a psychologist at UC Berkeley who has been studying 156 married middle-aged and older couples that were together for more than 20 years. Every five years, the couples were asked to come in and report on their current marital satisfaction. They were observed interacting with each other in a lab setting, where researches judged their interactions though their facial expressions, body language, tone of voice and topic of discussion. Of those involved, 125 also agreed to provide DNA samples.

by Tibi Puiu
in Genetics, News, Science
A A

Couples today have different expectations about the benefits of both forming a union and formalizing that union through marriage than they had say in the 1950s when women lacked access to higher education, well paid jobs and birth control pills. According to a report called “Marriage and Divorce: Changes and Driving Forces“, marriage rates are at their lowest in the past century, but divorce is less likely today than it was 30 years ago. So, there’s no doubt that the patterns of marital union or life as a couple have significantly changed, yet our emotional response has not changed with culture. Frustration, bickering, jealousy – these are feelings that any person in a relationship, to a variable degree, experiences whether we’ll taking about people today or in the stone age.

The science of love

With this in mind, if we’re to imagine away external factors that typically put strain on a couple, say children and money, are there any defining characteristics that deeply influence how happy people are in a relationship and, consequently, predict how long a couple will last together? Dr. Robert W. Levenson is a psychologist at UC Berkeley who has been studying 156 married middle-aged and older couples that were together for more than 20 years. Every five years, the couples were asked to come in and report on their current marital satisfaction. They were observed interacting with each other in a lab setting, where researches judged their interactions though their facial expressions, body language, tone of voice and topic of discussion. Of those involved, 125 also agreed to provide DNA samples.

Levenson and his colleagues found that one key psychological trait that makes relationships long lasting is conflict resolution. Specifically, how one of the two persons involved in the relationship (the most sensitive or the “weakest” according to the researchers) reacts to conflict.

“When we started, we were convinced that it was all going to be about regulating the husband’s [emotional] temperature because men tend to get uncomfortable with conflict and want to solve it quickly. That was our hunch, but it turned out to be just the opposite. Couples who seemed to get happier over the 20-year study were those who could regulate the wife’s emotions.”

In most cases, it made little difference how long it took for the husband to cool down after an argument, but it made a lot of difference how quickly the wife cooled down. But that’s not to say this is a gender issue. Apparently it boils down to power and control.

“In these groups there tends to be a confounding of gender with power.  So in many of these marriages the husband has more power.  In the older group they may have that because they’re the one who is more likely to have had a career.
And so we’re often not sure with these kinds of findings whether it has to do with women or it has to do with the person in the relationship who has less power.”

Levenson studied same sex couples as well, both men-men and women-women, which enforced the idea that gender was not necessarily a dominant factor to healthy relationships. The same pattern was noticed where the more powerful person ended up looking like the male in heterosexual relationships. As such, power in a relationship and the desire to move it in a direction where more significant than a person’s gender. Specifically, the person with less power tends to want more change in the relationship and feels frustrated when  the issues raised aren’t resolved. ”It would be quite reasonable to think that the less powerful person would be the one for whom cooling down would be more critical,” Levenson explains. 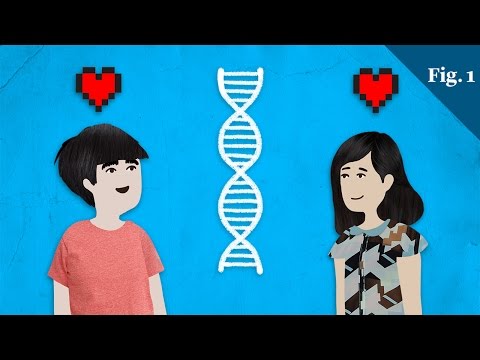 Concerning genetics, the researchers found  an allele known as 5-HTTLPR, which is inherited from each parent and either comes in short or long lengths, could influence how people view their marriage. Those who had one or two long alleles were less likely to be  annoyed by different emotional changes in their relationship. On the contrary, those who had two short 5-HTTLPR alleles where more likely to become more frustrated when the relationship wasn’t going so good, but also felt more elated when everything went smooth. Basically, people with the shorter alleles have amplified emotions and thus more sensitive to strains in relationships. Of course, this doesn’t mean that shorter and longer allele people aren’t compatible. Only 17 percent of the couples had two short 5-HTTLPR alleles.

“Neither of these genetic variants is inherently good or bad,” lead author Claudia M. Haase, assistant professor of human development and social policy at Northwestern University, said in a press release. “Each has its advantages and disadvantages.”