The Berkeley Earth Surface Temperature team has concluded its study, which had the objective of analyzing global temperatures ever since the 1950s. Their conclusion – since then, global average temperatures have risen by almost two Fahrenheit degrees, which is a lot. Yeah sure we’ve heard this a million times before, but why is this time special? 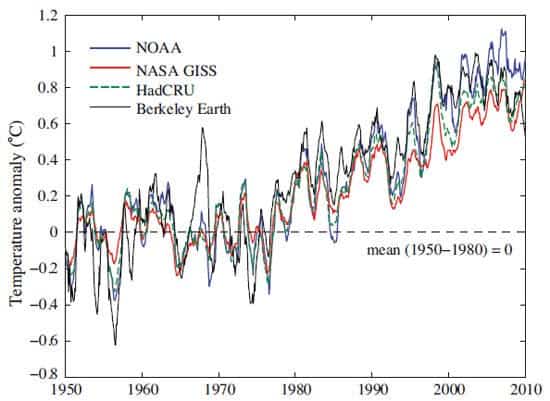 First of all, the study is independent. No government sponsored it, there are no directors, so there is absolutely no direct political pressure whatsoever. It is also open source – the entire dataset is public and everybody can access it and interpret it any way they want.

Furthermore, and this is where it gets interesting, it is sponsored only by donations, and the single largest donation was given by Charles G. Koch Charitable Foundation; in case you are unaware, this fundation openly supports climate skepticism, and there is evidence that it even funds studies just to support climate skepticism – the Koch company is involved heavily in the oil and chemical industry. So if the Koch brothers gave the money here, and the study still backs global warming up, you just know something’s happening.

To finish it off, this study addresses the concerns that skeptics raised about previous studies. This includes the potential effect of urban heat islands, the quality of temperature monitoring stations, and selection bias risk.

So even this open source study, funded by climate skeptics finds that global warming is a major issue, you would expect people to just back off and admit they were wrong, right? I mean, if I root for something, and my own people show me I’m wrong, I admit I’m wrong and that’s that. Nope, this is not the case. You can still expect people to deny climate change in an almost pathological fashion, you can still expect people to ignore the evidence and we still have a lot to wait for real, global measures against global warming to take place. This is the wonderful world we live in; hopefully, by the time people are convinced, it won’t be too late.