Everest glaciers might be gone thanks to global warming, new study concludes

A new study shows once again that no place on Earth is safe from the effects of climate change. Even in the heights of the Himalaya Mountains, glaciers aren't safe; there's a good chance that 99% of the glaciers around the Everest area will melt by 2100.

by Dragos Mitrica
in Climate, News
Reading Time: 3 mins read
A A
Share on FacebookShare on TwitterSubmit to Reddit

A new study shows once again that no place on Earth is safe from the effects of climate change. Even in the heights of the Himalaya Mountains, glaciers aren’t safe; there’s a good chance that 99% of the glaciers around the Everest area will melt by 2100. While this is not necessarily the most plausible scenario, it seems very likely that much of the ice mass will be lost. 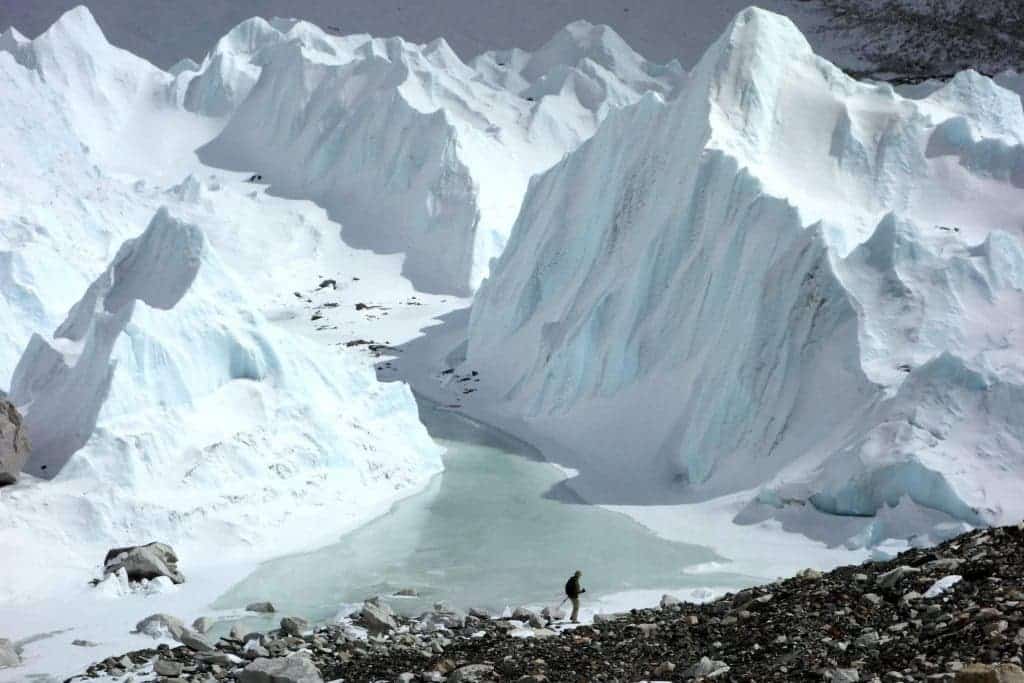 For all their importance and beauty, little data is available about glaciers, simply because it’s difficult to gather. But the Everest glaciers are an exception, because so much infrastructure is built around Everest, and of course, because so many people travel to the peak. Joseph Shea, a research scientist at the International Center for Integrated Mountain Development studied how these glaciers will develop in reaction to climatic stress.

Glaciers form in areas where the deposition of snow exceeds the rate of melting. Glaciers slowly deform and flow due to stresses induced by their weight, and at a geological scale, they’re highly mobile features, subjected to numerous factors – especially climate. For the Everest glaciers, the writing is on the wall: increased temperatures will lead to more and more melting, and ultimately, the glaciers will vanish.

“The signal of future glacier change in the region is clear: continued and possibly accelerated mass loss from glaciers is likely given the projected increase in temperatures. Our results indicate that these glaciers may be highly sensitive to changes in temperature, and that increases in precipitation are not enough to offset the increased melt.”

They developed several models, but for all of them, the scenario was the same.

“No matter which scenario or model type was used, the results were clear: glaciers in the Everest region could see sustained mass loss through the 21st century,” Shea added.

“The freezing level currently varies between 3,200 meters (10,498 feet) in January and 5,500 meters (18,000 feet) in August. Based on historical temperature measurements and projected warming to the year 2100, this could increase by 800-1,200 meters,” said study co-author Walter Immerzeel of Utrecht University in the Netherlands. “Such an increase would not only reduce snow accumulations over the glaciers, but would also expose over 90 percent of the current glacierized area to melt in the warmer months.”

From what I could find, this is the most detailed study on the rate of melting glaciers in Himalayas; it draws an alarm signal, especially when you consider that 1.5 billion people depend on the Himalayas for drinking waters, irrigation and hydropower. Any disturbance in the lifecycle of the Himalayan snow comes with a huge risk for them. Researchers recently found similar results in western Canada, and there’s a good chance that many other cold areas are suffering the same type of effects. In the short run, the areas may benefit from increased water flows, but in the long run, as the snows deplete, the results can be devastating.