by Mihai Andrei
in Astrophysics, Remote sensing, Space
Reading Time: 2 mins read
A A
Share on FacebookShare on TwitterSubmit to Reddit

ESA’s XMM-Newton space telescope has found a star and a black hole that orbit each other at the whopping rate of once every 2.4 hours. Basically, the star orbits the black hole at 2,000,000 km/hr. 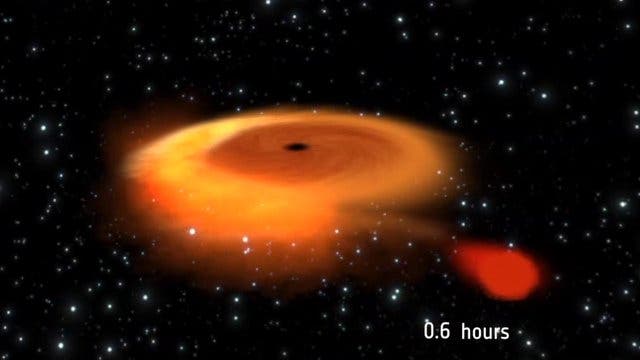 The black hole here is 3-4 times heavier than the Sun, while the red dwarf has a mass just 20% that of the Sun. Because their masses are comparable, the red dwarf doesn’t truly orbit the black hole, but rather they both orbit their common center of gravity.

“The companion star revolves around the common centre of mass at a dizzying rate, almost 20 times faster than Earth orbits the Sun. You really wouldn’t like to be on such a merry-go-round in this Galactic fair!” says lead author Erik Kuulkers of ESA’s European Space Astronomy Centre in Spain.

His team also saw that they lie high above the Galactic plane, out of the main disc of our spiral Galaxy, an unusual characteristic shared only by two other black-hole binary systems.

Another thing to note is that the centripetal force (the force that makes a body follow a curved path) acting on the red dwarf is much stronger on the side of the red dwarf facing the black hole than the outside. The difference between these two forces is so large that the star is literally being torn apart.

“These high galactic latitude locations and short orbital periods are signatures of a potential new class of binary system, objects that may have been kicked out of the Galactic plane during the explosive formation of the black hole itself,” says Dr Kuulkers.

A A red dwarf is a small and relatively cool star. They are by far the most common type of star in our galaxy, but due to their low luminosity, they are often very hard to spot. Even the largest red dwarfs have just 10% of the Sun’s luminosity.