This is not really news, but it’s so awesome I just had to share it. Astronomers in England have discovered a “singing” black hole in a distant cluster of galaxies. 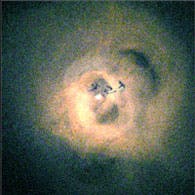 But wait a minute, you’re gonna say; just hold on a second there. How can sound escape a black hole, and what does it propagate through? That would be a very legit question; after all, sound needs some sort of medium to propagate, like air, or water, or even solid rock (earthquakes are just a type of acoustic waves). But space is not empty at all. it contains stray bits of stuff — gas atoms and dust of varying amounts. In this case of the Perseus cluster (where the black hole is located in), the hot gas that surrounds the black hole is this medium.

The sound waves themselves contribute with energy and keep the gas warmer. These warmer temperatures, in turn, regulate the rate of new star formation, and hence the evolution of galaxies and galaxy clusters – and this holds important information for cosmologists. But enough of these trivial matters like star and galaxy formation – let’s get back to our singing black hole!

There is only one frequency, one note, that it emits, because that gas is only disturbed at single frequency – that frequency. If you take the middle piano C key as reference (which is pretty standard). The Perseus cluster black hole’s B-flat, is a whopping 57 octaves below middle C or one million, billion times lower than the lowest sound audible to the human ear!

Also, to be very correct, it’s not the actual black hole that’s emitting the sound, but rather a fallout of the black hole existing, disturbing outlying matter.