Space flight insomnia is quite a common issue, one for which space agencies don’t have a definite answer yet – but they’re working on it; one thing NASA plans to do is swap a fluorescent panel with a solid-state lighting module (SSLM) containing LEDs which produces a blue, whitish or red-coloured light depending on the time. 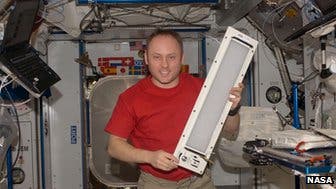 Some studies concluded that this change will not only combat insomnia, but it will also fight against depression, sickness and proneness to fatigue related mistakes. Currently, over half of all active astronauts rely on sleep medication, at some point, to sleep and get rest. For $11.2 million, NASA hopes to use the science of light to reduce the astronauts’ dependence on drugs and improve their overall performance.

“On some space shuttle missions up to 50% of the crew take sleeping pills, and, over all, nearly half of all medication used in orbit is intended to help astronauts sleep,” a NASA report said in 2001. “Even so, space travellers average about two hours sleep less each night in space than they do on the ground.”

Both humans and animals on Earth follow what is called a circadian rhythm – a 24-hour biological cycle involving cell regeneration, urine production and other functions critical to health. Basically, your body’s rhythm is driven by a circadian clock, and rhythms have been widely observed throughout the entire life forms – plants, animals, fungi and cyanobacteria.

What NASA wants to do is simulate a night-day cycle to minimise sleep disruption caused by the lack of a natural environment onboard missions such as the International Space Station. However, what I really love about this idea is that it could eventually help out a big part of the population on Earth which is suffering from sleep disorders.

“A significant proportion of the global population suffers from chronic sleep loss,” said Daniel Shultz at the Kennedy Space Center. “By refining multipurpose lights for astronauts safety, health and well-being in spaceflight, the door is opened for new lighting strategies that can be evolved for use on Earth.”