ISS time-lapse: the best view in the solar system

by Tibi Puiu
in Space, Videos
Reading Time: 2 mins read
A A
Share on FacebookShare on TwitterSubmit to Reddit 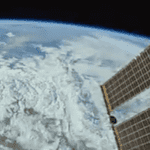 It seems we’ve been privileged with yet another time-lapse video showing our marvelous blue marble planet in all its splendor as seen daily by astronauts stationed at the International Space Station. This time, the whole video was shut from the ISS cupola, a dome-shaped structure fitted with seven specially developed windows, which astronauts use for observations, amplifying the sense of being right there, hovering in sub-orbit. Check out the video, courtesy of Wired, below.

On a related note, at the end of the month, SpaceX will become the first private company ever to have a spaceship, namely its Dragon capsule, to dock with the International Space Station. Exciting times!

Check out more videos filmed from the ISS by NASA here.