Almost one year and a half ago six volunteers embarked on a fictive mission to Mars, designed to simulate the harsh conditions of interplanetary travel and isolation from the rest of the world. Today, November 4th, the team composed of volunteers from Europe, Russia and China is set to end their mission, hypothetically land back on earth and exit the module they called home for the past 520 days.

The Mars500 project is the most ambitious project of its kind, judging from length and resources ($15 million), intended on simulating an entire there-and-back manned trip to the red planet. ESA and Russia’s Institute of Biomedical Problems partnered for the project.

For 520 days, the volunteers lived in the spacecraft mock-up, which was actually an isolation facility housed at the Russian Institute for Biomedical Problems in Moscow, where they performed experiments and even conducted mock “Mars walks” on the surface of the fake Red Planet. During their whole stay, researchers on the outside monitored them constantly, to see how the physically and psychologically react to confinement. Brain and body scans were also employed throughout the mission.

“The length of Mars500 is unique — there has never been such a long isolation before, so that gives you unique data,” Fuglesang told SPACE.com. “From a logistics and communications point of view, it was quite realistic. Of course, there are certain aspects that you cannot simulate. You cannot simulate weightlessness or radiation, for example.”

The last part of the quote sums up the whole issues revolving around this simulation, since these are the greatest aspects to overcome. During entire months spent in zero gravity, ones muscles atrophies, while the constant exposure to high level of radiation steadily hurts internal organs. Regarding their confinement, ESA officials claim the crew members handled themselves remarkably well, despite some up and down periods.

“They have had their ups and downs, but these were to be expected,” Patrik Sundblad, a life sciences specialist at the European Space Agency, said in an online recap of the mission. “In fact, we anticipated many more problems, but the crew has been doing surprisingly well. August was the mental low point: It was the most monotonous phase of the mission, their friends and family were on vacation and didn’t send so many messages, and there was also little variation in food.”

Sure, but they all knew once the 520 days were over, they’d be free to safely go back to their homes and families. When you’re constantly millions of miles away from Earth, it’s a lot easier for mental meltdowns to occur, even of psychotic proportions. However, this is just one of the many experiments and simulations in stored for the future, in preparation for an impending Mars missions, hopefully by the beginning of the next generation. 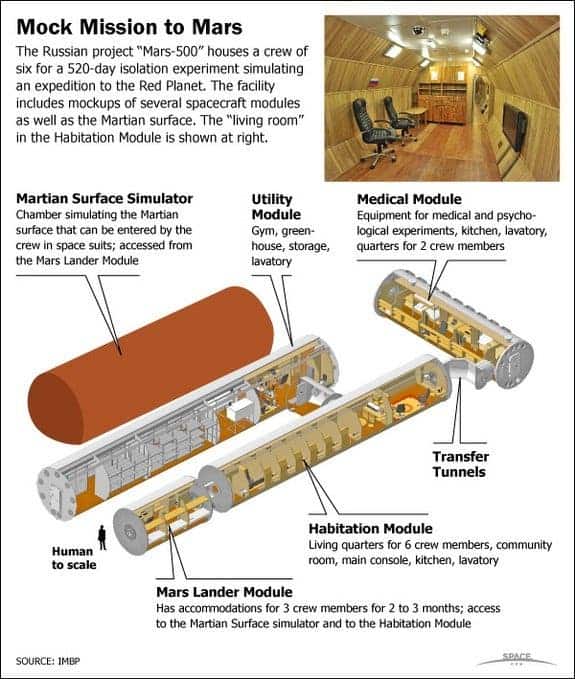 Currently, the most valuable Mars simulation is located a few kilometers away from Earth and is a multi-billion international project – the International Space Station. There for the last 11 years, the effects of gravity and radiation on long term exposure to humans has been renetlessly studied, with results so far expressed in a better understanding of the phenomenon, rather then implementing solutions. For next year NASA is planning tests for the ISS which help prepare for future MARS missions, like implementing a 10 minute communications time-delay, while some experts are currently discussing whether or not to attach prototype Mars modules to the station for future test runs.

Two robotic missions are set to blast off toward the Red Planet in the next month: Russia is due to launch its Phobos-Grunt probe from the Baikonur Cosmodrome in Kazakhstan on Nov. 8, with a landing on the Martian moon Phobos expected in 2013. NASA’s Mars Curiosity rover arrived at its Florida launch pad today, in preparation for a Nov. 25 launch.