Manu Sharma is an aerospace engineer with a great vision: he wants high-school kids and college students to have the real possibility to conduct their own experiments in space via the International Space Station. The whole idea is extremely noble and the prospects young science enthusiasts have after such an experience are grand. But doesn’t launching anything into space cost millions of dollars?

Sharma was met with the same logistics and financial hurdles while in college himself. Back then he approached his professors about the idea of sending a  cube-shaped project he was working on into space, but was told it would take four years. There had to be a cheaper and faster way of sending experiments or, heck, anything into space. In the end, he founded Infinity Aerospace, a company who develops an open-source since platform called the ArduLab. The Ardulab is basically a tiny  polycarbonate chassis only 3.5×2.4 inches in size, fitted with a microcontroller with a SD slot for storing onboard memory, and a simple Arduino based programmable interface. Inside, anyone can place any kind of experiment worthy of studying space phenomena, be it fluid mixtures, gardening, an ant farm, whatever. 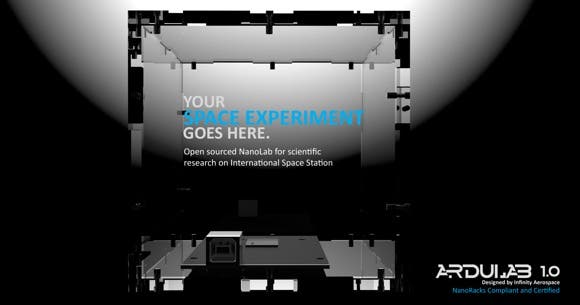 The company launched its first Ardulab only yesterday on the Orbital Sciences Cygnus spacecraft , and should reach the ISS this week. Infinity Aerospace has more launches lined-up already, as NASA’s Jet Propulsion Laboratory will send up two experiments on a later mission, and Stanford University and three high schools in Houston are already designing ArduLab projects that will launch in July. Sharma estimates some 40 Ardulabs could fit in the ISS and as the project and its benefits become more recognized, other schools and institutions should follow suit.

“Our goal has been to tap into education, make people do space projects, or even art,” Sharma said.

Easy to use, cheap (the company claims the whole project including launching won’t cost more than $5000), fast to deploy (a class can design its own experiment in under 9 months) and scientifically valuable the Ardulab could make a lot of kids’ dreams come true.