In a week filled with bad news for space exploration, astronomers finally have something to be happy about: the Mars Curiosity rover is ready to head towards the Red Planet, as NASA makes the final preparations for a launch scheduled for November 25. 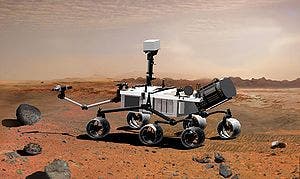 The rover is currently waiting patiently ontop an Atlas V rocket, just waiting for orders that will come from Cape Canaveral.

“Preparations are on track for launching at our first opportunity,” confirmed Pete Theisinger, Mars Science Laboratory project manager at NASA’s Jet Propulsion Laboratory in Pasadena, Calif.   ”If weather or other factors prevent launching then, we have more opportunities through December 18.”

The one ton rover will begin its land mission from inside Gale crater, near the base of a layered mountain; its main mission is to investigate if environmental conditions could have been favorable enough to support the development of life; but don’t let your imagination fly just yet – at most, researchers are hoping to find clues of microbial life, in the preserved evidence of those conditions.

“Gale gives us a superb opportunity to test multiple potentially habitable environments and the context to understand a very long record of early environmental evolution of the planet,” said John Grotzinger, project scientist for the Mars Science Laboratory at the California Institute of Technology in Pasadena.

”The portion of the crater where Curiosity will land has an alluvial fan likely formed by water-carried sediments. Layers at the base of the mountain contain clays and sulfates, both known to form in water.”

Curiosity is supposed to be much heavier and sturdier than its smaller cousins, Spirit and Opportunity – which did an absolutely fantastic job. However, this Martian expedition is expected to be both heavy and tricky; researchers are especially worried about the landing Due to its large mass, an air-bag cushioned touchdown is no longer an option, so engineers have figured out another method with a rocket-powered descent stage.