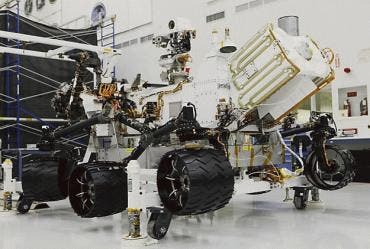 NASA engineers and technicians are making the last adjustments to the Mars Rover, which is about the size of a small SUV; the rover is set to be sent to Florida for launch later this year, so everybody’s in a hurry and trying to make everything as fast as they can, without making any mistake whatsoever.

A small army of people dressed in protective suits has been working inside a clean room at the Jet Propulsion Laboratory assembling Curiosity (the Mars Rover) and testing its science instruments.

Curiosity, which is bigger than your average car, will drive around Mars with the primary objective of seeing if ancient environment of Mars could have supported primitive life. The mission was set for 2009, but due to the soaring costs and numerous technical setbacks caused a delay of 2 years.

NASA will begin shipping components at Cape Canaveral next month. All in all, the Mars Rover mission, which costs about $2.5 billion should start in late November. It will definitely be the highlight of the year, and if everything goes according to plan, not long from now Curiosity will provide some answers to questions which have been puzzling researchers for decades, or even centuries.