by Mihai Andrei
in Geology, Space
A A

NASA’s famous rover, Opportunity, seems to have stumbled upon clear evidence that water used to flow on Mars, a long long time ago. 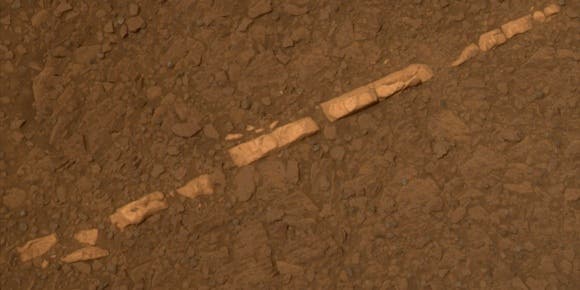 Opportunity was prowling around the Meridiani Planum on Mars, looking at hematite (an iron oxide) when it stumbled upon something which delighted researchers: gypsum. Why is this vein of gypsum so important ? Because this vein could only have been created by flowing water, they claim.

“This tells a slam-dunk story that water flowed through underground fractures in the rock,” says Steve Squyres of Cornell University, lead Opportunity boffin. “This stuff is a fairly pure chemical deposit that formed in place right where we see it. That can’t be said for other gypsum seen on Mars or for other water-related minerals Opportunity has found. It’s not uncommon on Earth, but on Mars, it’s the kind of thing that makes geologists jump out of their chairs.”

The gypsum vein has been named ‘homestake’ by NASA; it is about the size of a human thumb and it protrudes slightly higher than the bedrock it is located in. They believe, after analyzing it with Opportunity’s instruments, that it is mainly made out of hydrated calcium sulphate – gypsum. 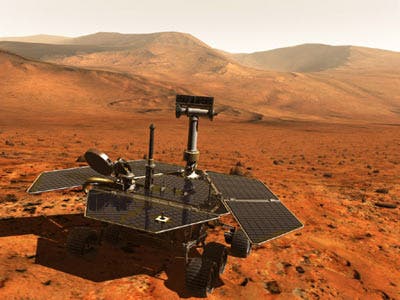 However, Opportunity can’t hang on there and analyze the gypsum vein for long; it has to move on towards north-facing slope on the Endeavour Crater in order to align its solar panels properly for the upcoming Martian winter. It’s brother, the Spirit rover, failed to do so in time because it was caught in a crater – and the valiant machine was never heard from again. However, Opportunity surpassed even the most optimistic prognosis, and still continues to provide valuable data to researchers on Earth; now, it has every chance of arriving in a safe place, hibernate, and then go at it again.