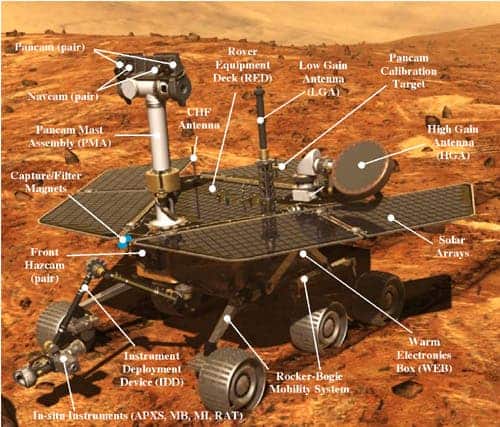 Currently, there are two operational (hopefully) NASA rovers located on Mars; the first one, Opportunity, is exceeding all expectations, and is functioning better than anyone would have predicted. The second one however, Spirit, has been silent for more than a year.

It seems like a really long shot, but NASA is going to make one last ditch attempt to communicate with Spirit, and after that it will scale back the listening campaign focused on Spirit, and focus almost all efforts on its healthy Mars Rover. Spirit got stuck in a sand trap in 2009 during a routine drive, and despite efforts, it hasn’t been able to escape, and was unable to tilt towards the Sun before the coming of the Martian winter. As a result, it didn’t gather enough solar energy, and went into hibernation.

Researchers expected the rover to wake up as time passed and the Sun faced the rover, but that moment never came. Ray Arvidson, of Washington University in St. Louis, believes the odds are well below fifty-fifty, but the attempt should be made and hope should not be given up.

“I would be surprised if we re-establish communication – happy but surprised,” said Arvidson, a mission deputy principal investigator. “It’s been so long.”

If in time Spirit still doesn’t respond, NASA will have to declare the Mars rover lost, but even if this is the case, it achieved pretty much all of its objectives.