Mars Rover on the edge of a crater

by Mihai Andrei
in Geology, Space 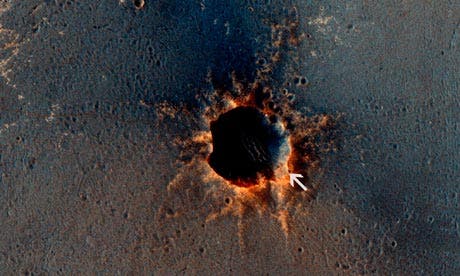 The Opportunity Rover is one brave little guy – he managed to defeat even the most optimistic of predictions, functioning several years after its primary objective was fulfilled. But now, he is little more than a bluish speck on this picture of the Santa Maria crater on the surface of Mars, taken by the Mars Reconnaissance Orbiter’s high resolution camera.

The photograph was taken from an altitude of approximately 250 km by the orbiter, as Opportunity extended one of its arms to take closeups of a rock; the tracks left behind can be seen to the left of the crater.

The Rover was dispatched in 2003, and also had a twin brother called Spirit, who fell silent one year ago, after a wheel got stuck in the Martian soil. It is still gathering very useful information about Martian geology, and now it is “studying” the relatively fresh 90m wide crater, that will provide some insight on how erosion and Martian weather have acted since its formation.

After its mission here is completed, the rover will move on and travel almost 4 km to a bigger crater, Endeavour, where the Martian soil contains hydrated sulphates and phyllosilicates that formed in a wetter past.