Turning bullets into diamonds, finding brain activity in dead salmon, finding out why hair turns green, and others: the Ig Nobel prize

by Mihai Andrei
in Other, Science
Reading Time: 2 mins read
A A
Share on FacebookShare on TwitterSubmit to Reddit

Every scientist dreams of getting his hands on a Nobel prize – it’s the highlight of one’s career, unless you’re Obama. But winning a Nobel Prize spoof… is that really something you want to get? Apparently… why not? 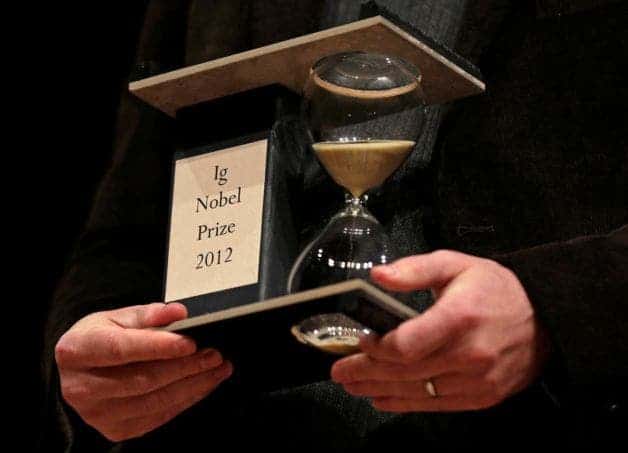 The Ig Nobel prize, the whimsical award for research which is useful, but also really cooky is held each year at Harvard University, honoring researchers from all around the world; and a good year for wacky science it was. Mechanical engineers from University of California, Santa Barbara won the fluid dynamics award for explaining why coffee tends to spill. Americans won another award for finding neural activity in a dead salmon and thus proving how inaccurate brain scans can sometimes be.

French researchers showed how you can prevent people’s bowels from exploding during colonoscopies (yes, this does happen sometimes) and a Swedish chemist won the Ig nobel award for figuring out why so many people’s hair was turning green in a small Swedish village (there was copper in the water).

But perhaps the most interesting part of the evening was when Russian scientist Igor Petrov took the stage; he created a device which turns old, unused bullets into diamonds. Seriously. “Ladies, if you want diamonds, come see me after the show — but bring your own explosives“, he said in his acceptance speech.

“We think we have discovered one of the secrets of the universe,” said Patrick Warren, a researcher at Unilever, accepting the physics prize for helping derive the ponytail-shape equation.

Andre Geim, one of the most famous scientists on the planet at the moment, who won a Nobel prize for the discovery of graphene, also won an Ig nobel prize for magnetically levitating a frog. Furthermore, although usually such awards are discarded as trivial, they often turn out to lead to remarkable discoveries. For example, in 2006 a study showing that one of the malaria mosquitoes (Anopheles gambiae) is attracted equally to the smell of Limburger cheese and the smell of human feet led to the planting of cheese in strategic places, which slowed down the malaria epidemic and ultimately saved numerous lives.